And it’s full winter. Hard snowflakes in the wind and ice on the lakes and finally I really need the winter coat that I have hauled along to no use before.
I have been here before, on tour two years ago. I vaguely recognize the layout of the city, but will have even less time to explore it the way I like: on foot, alone.
It begins badly. I have a 7.10 departure from Houston. I get up at 4.30 (I know, those of you who know me, including, of course, Frank, will find this hard to believe, but I do) to give a little extra time just in case. It proves to be uselful, because it transpires that again I do not exist. It’s a hard truth to learn at 5.30 in the morning. So I have to take myself to one terminal after the other chasing an elusive booking. I finally find a couple of Continental staff that seem to sense my fragile state and take pity on me and sort things out. It transpires that my travel agent has had me a day ahead for a few days, which means I have been a ‘no show’ with the result that all consecutive flights have been cancelled. I wonder what I have clocked up on my New Zealand mobile phone trying to sort things out with my publisher in New York.
Boarding pass in hand and through security I have another terrible breakfast. I should be slim by now, but then there are the lonely dinners in my rooms…
I land on time and my escort Tim, whom I know from last time, takes me straight to a TV studio where I do a five minute interview. Taped, it will show later in the week. I have no idea how I look in comparison to the immaculately made up host. There is no make up for me and no preparation. Perhaps they like odd looking Scandinavian sounding people here.
W 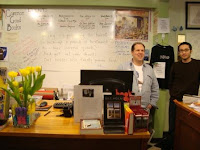 e carry on and do stock signings all over Minneapolis and St Paul. A totally extraordinary number of copies. I’ll see how my hand feels tomorrow. Two small book stores stand out, both owned by authors: Garrison Keillor’s Common Good Books (pic left) and ‘Birch Bark’ owned by Louise Erdrich, a Minnesota Indian writer. Both stor 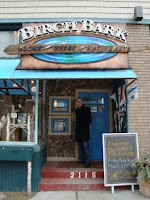 es are special, places you want to get lost in.
At a particularly nice Barnes & Nobles (there are nine in the greater area) I sign about sixty copies and meet exceptionally dedicated staff. Big CAN be good!
We stop at the magnificent building that houses the American Swedish Institute founded by Swedish born newspaper tycoon Swan J. Turnblad. It transpires they would have bent over backwards to accommodate an event, but were never told of my visit… 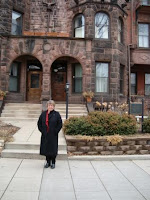 We go past Scott Fitzgerald’s home. The one he finally could afford to buy. His parents rented in the area when he grew up. I always imagined he lived the kind of life that the characters of his books did, but this house looks rather drab.
My event is at the book store at Minnesota University. I don’t know what to expect, but it is a rather usual crowd, mostly women, mostly my age. But well read, interested and wonderful to meet. And about thirty of them.
Everywhere I go I finish with the adagio from Sonata for Miriam by Alexander Ekroth-Baginski and played by Lara Hall and Mikhali Tablis. And it always has the same effect. People are teary eyed and speech less. Then they want to buy the music.
I don’t know how to make it available.
An early evening back at an even more amazing hotel, Graves 601. Extraordinary, with a very insignificant sign at street level and the reception on the fourth floor. I have a huge plasma screen even in the bath room. And only one night to enjoy it.
Posted by Beattie's Book Blog at 5:05 pm

I attended Linda's book signing at Border's Books in Ann Arbor, Michigan on March 27th. I was completely captivated by her narrative of her own life. The richness of the description of the times, the places and her emotional experience of all of them made it obvious why she has become a writer.
It is now March 29th. I feel like a young child waiting for Christmas morning as I log on several times a day waiting for the next entry on her book tour blog. Her words have captured my heart strings and I can't wait for more.