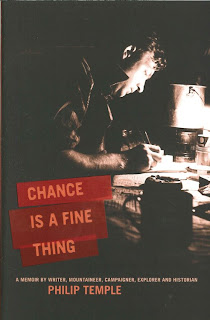 In the introduction to his memoir the author suggests that “memoir is personal and selective, aiming to render in eloquent focus a story drawn from the writer’s relationships and experiences”.
I think that is probably a fair definition.
It is interesting to observe that there is much publishing of memoir in New Zealand and very little publishing of autobiography. There is no doubt that autobiography, by its very nature, requires much more time and effort because of the research required and the longer time need for its compilation. Unless a person is hugely famous in a given field or enjoys major celebrity status then a memoir is going to have a far wider appeal than an autobiography with its much greater attention to detail and chronology.

Temple has enjoyed a varied and interesting life in a number of fields as suggested by his book’s subtitle and even if he is unknown to the reader this will not stop the book from being a fascinating read.

The book starts with his decision aged 18 to leave the UK and emigrate on his own to New Zealand. He then recounts his childhood years in both Yorkshire and London.
I liked his account of his reading when he was 10 years of age - “I began reading properly: all the Swallows and Amazons books, one after the other, and I wrote a letter to Arthur Ransome asking if “The Lake” was really Lake Windermere. He sent me back a postcard that was really annoying because he did not actually say. I started reading Biggles books too, and when they opened a new library at Notting Hill, I was the very first person in the door so that I could grab three brand new Biggles books. I was late for school but was let off when they saw my bag bulging with books.”

By the time he was at secondary school it was clear that literature, music and arts were the subjects in which he was most interested.
He left school at seventeen and started working for a technical publication firm in Westminster before deciding he needed to escape his mother and so his attention turned to possible emigration destinations. His first choice was Canada but when he saw the long lines at the Canadian Immigration Office he decided to look elsewhere. Having decided it would be too hot in Australia he finally settled on New Zealand. A New Zealander had climbed Everest in Coronation year and his mother had always said the best lamb and butter came from there and after a lot of reading, including the New Zealand Weekly News and Landfall the decision was made. In the waiting room at the NZ High Commission he found a range of New Zealand magazines including technical journals similar to the ones he worked on at Westminster so he wrote off to several and within a month had been offered a job in Wellington.

The book then deals with his arrival in New Zealand as a “hapless young immigrant” coping with the strange language and social practices, and later with his introduction to climbing and mountaineering, which was to become such a major part of his life and about which he wrote in many of his more than 30 books.

Temple is a writer of significant diversity having published fiction, history and biography, travel and adventure, nature and environment, photographic books as well as children’s books.
Over the years he has been the recipient of many awards and fellowships which he deals with in the course of the memoir. These include the Katherine Mansfield Award, The Burns Fellowship, the National Library Research Fellowship, and The Creative New Zealand Berlin Residency.
..He has a long record of service with the NZ Society of Authors
and was honoured in 2003 by being made an Officer of the New Zealand Order of Merit for his services to literature.

He is remarkably candid throughout his book about his personal life, both in terms of his relationship with his parents, his own marriage and its subsequent failure, his children and grandchildren, and his subsequent relationships both in New Zealand and in Germany.
He and novelist Diane Brown have been partners since 2000 and the memoir is dedicated to her – For Diane who has provided the best possible conclusion.
The book is liberally illustrated with black and white photographs. It will be read by many New Zealanders with great interest, especially those in the world of literature, many of whom are mentioned.
My review of Chance is a Fine Thing was first published in Canvas magazine in the Weekend edition of The New Zealand Herald, 21 March 2008.
Posted by Beattie's Book Blog at 6:40 am