I love books, have done since as far back as I can remember.
We didn’t have many books in our home growing up but I was a frequent library user - Gisborne Public Library, Cosmopolitan Club Library and occasionally the London Bookshop Lending Library -consuming all the Just William titles, The Famous Five and The Hardy Boys mysteries as well as Biggles until my Form One teacher, Miss Fisher, introduced me to the real thing in the form of Arthur Ransome’s Swallows and Amazons series. Wow, read them all, there were seven titles I think, I was hooked. I still like reading books that run in a series, probably why today I am so keen on crime fiction.
Once my school days were over and I was out in the workforce I became a book buyer and have been one ever since.
In my 20's I was co-founder of Beattie & Forbes Bookshop in Napier and then 10 years later I joined Penguin Books NZ for a ten year stint before going on to Scholastic Publishing for another 10 year period.

Since then I have worked in the publishing industry as a consultant as well as being a judge for the Montana New Zealand Book Awards and the Commonwealth Writers Prize and these days am a fulltime book reviewer and book blogger.

So for all my adult life I have been surrounded by books. And I love it. One of the joys of being a book reviewer is the steady stream of books that arrive in the mail or get delivered by courier. Sometimes they are expected titles that you have been asked to review but often the contents of the parcel are a surprise and I have never got over the excitement of opening parcels containing books. Such a huge variety, every one unique, how exciting.
On Tuesday last the following four books arrived and apart from that fact that three were fiction they have nothing at all in common with each other .See what you think. 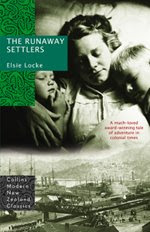 This classic New Zealand children’s story was first published in 1965, I had the privilege of publishing it myself in paperback in the 80’s and I am glad to see it back it print. Someone once described it as New Zealand’s own Little House on the Prairie and I think that an appropriate comparison describing the hardships and adventures of the Small family who arrive in Christchurch in 1859 without a penny to their name.
Elsie Locke (1912-2001) made a great contribution to New Zealand as a writer, historian and community leader in peace movements and women’s affairs. She was awarded an honorary doctorate by the University of Canterbury in 1987 and was awarded the Margaret Mahy medal in 1995 for her contribution to children’s literature.
I asked Lorain Day, publisher at Harper Collins NZ the philosophy behind the Collins Modern New Zealand Classics series. Here is her response:

Back in 2004 HCNZ took a strategic decision to try and keep in print some of the classic children’s novels that had slipped out of print and off classroom and library shelves with the passage of time. They needed to be stories that we felt were timeless, and were significant works that made a contribution to the rich diversity of New Zealand Children’s Literature. We decided to target books that we felt needed to be reintroduced to a new generation of readers.
As such, we developed the Collins Modern new Zealand Classic series and have since released
Tripswitch, by the late Gaelyn Gordon (2004)
The Blue Lawn, by William Taylor (2004)
The Guardian of the Land, by Joanna Orwin (2005)
A Canoe in the Mist by Elsie Locke (2005)
The Runaway Settlers by Elsie Locke (2009)

While our original plan was to release two titles each year, sales have been modest, and we decided in 2006 to retain the imprint for the use of extra special books that came our way rather than set an annual target. We were delighted to be able to add The Runaway Settlers to the series when the rights became available and were offered to us, as this title had featured prominently on our wish list at the time the series was established.

The title has to be a send up of Eat Pray Love, Elizabeth Gilbert’s huge 2006 best-seller. Even the cover employs the same design and typography.
This is a light-hearted fictional tale of Bob Sullivan’s year following his divorce. I was going to say it has no chance of challenging the sales of Eat Pray Love but I note that Warner Bros has bought the film rights, so who knows? 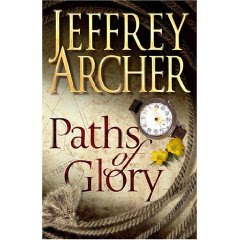 Not many authors still have their novels published in hardcover in the New Zealand and Australian markets and the fact that this latest novel from Jeffrey Archer is in hardcover, and a most handsome one at that, says a lot for the author’s continuing popularity.
Paths of Glory is Archer’s fictionalized account George Mallory’s life culminating with his third attempt to climb Mt.Everest in 1924 at the age of thirty-seven. He was last see 600 feet from the top but his body was not found until 1999 and it remains a mystery as to whether he ever reached the summit.
In this book Archer suggests he did make it but before we Kiwis go getting our knickers in a twist as to the suggestion that Sir Edmund Hillary may have been beaten to the summit we should remember that this is a work of fiction. The suggestion in a recent Sunday Star Times that Archer has insulted Hillary is childish, and frankly rather pathetic. Still it is all good publicity for the book, the endpapers for which feature Everest and the route Mallory followed.

And finally the last one, the non-fiction title, or is it?

This made me laugh out loud, such fun. With the title of the book and name of author on the left hand page and facing it four illustrations which tell the entire story!
So clever, so entertaining.
Imagine three illustrations in which to tell the story of such titles as The Clan of the Cave Bear, The No,1 Ladies Detective Agency, Crime & Punishment, The Thorn Birds, The Chronicles of Narnia, The Bible, Watership Down, Life of Pi, On the Road, Oliver Twist, Pride & Prejudice, Ulysses and loads more.
Hilarious, I enjoyed it enormously.
Books, don't you love 'em? How dull life would be without them. Keep them coming!
Posted by Beattie's Book Blog at 7:22 am

And God I love this blog. Thank you Bookman Beattie for sharing your love of books with other booklovers.
Lee

Love your blog. A big thankyou for your efforts. "William","Swallows & Amazons", etc. takes me back. Very nostalgic. My mother used to buy me an English weekly boy's paper called "Champion"-Very exciting...happy days...