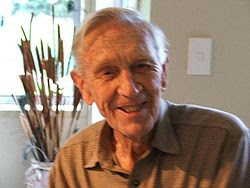 When I read of the death of Geoff Moon this week I was taken back to my bookselling days in Napier when a new book by him from publishers A.H.& A.W.Reed would be an occasion to celebrate. First because they were always superb books on NZ birds featuring his hallmark astonishing photography and second because they were always keenly sought after and were a welcome addition to our sales figures!

By the time of his death he must have published more than 30 different titles., more recently several co-authored with his second wife Lynnette. Here is a list of most of them, courtesy Wikipedia: 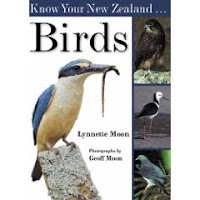 What a legacy. He was by profession a veterenarian living and practicing in Warkworth north of Auckland but his abiding interest and love was wildlife and conservation and even at the time of his death he and Lynnette were working on yet another book.

I never met you Geoff but I feel I have known you through your many gorgeous books on New Zealand's birds, I must mention in particular those astonishing shots of kingfishers. I salute you and offer my condolences to your wife and family. R.I.P. Geoff.

Aue! Ka hika he totara i te maranui a Tane-

I have over a dozen of Geoff's books. Never met the man, but love his work (and agree Bookman - his kingfiaher shots are truly remarkable.)

Thanks Graham - an excellent tribute.

Hello,
I am Geoff Moon's wife, Lynnette. I have only just read this Review and other comments. I am humbled, as I know Geoff always was, when his work was praised. He did not ever expect, or seek praise.
He was proud of his Work with the kingfisher and also the morepork, having spent much time with these particular birds.
Thank you on his behalf, to those who take the time to comment.
I know Geoff would be grateful.