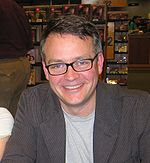 Puffin Books has sold The Enemy, Charlie Higson’s brand new action horror series, to the Disney-Hyperion imprint at Disney Book Group in the US. This is the first and only other children’s series of books from Charlie Higson (pic left) since the phenomenally successful Young Bond books, which have seen over a million copies in sales and have been translated into 24 languages.

'The entire Disney-Hyperion team read The Enemy over one weekend, putting aside plans because we just couldn’t stop reading it; we all knew we had to publish it,’ says Lola Bubbosh, Executive Editor, Disney Book Group. ‘Charlie Higson has turned his hand to another subject entirely and made it his own. The Enemy is full of unexpected twists, peril and breathless adventure with children living in a world of unimaginable horror who are constantly making difficult decisions, and showing bravery far beyond their years. We are confident this will be a tremendous hit.'

The first title, The Enemy, in Higson’s new series will be published by Puffin in September 2009. Set in contemporary London after a mystery illness attacks everyone over the age of 14, the afflicted either die or become zombies. Gangs of kids are left to fend for themselves, dodging the adults that are left who are so crazed by disease they have become little better than wild animals, and embark on an epic journey to what they hope is a new life.

Charlie Higson comments, ‘Having spent five years writing straight thrillers for kids I was tempted to try another genre. I wanted to see if I could write something frightening. I thought I owed it to the children of Britain to scare the living daylights out of them. We all need to be scared. It’s good for the soul. And kids need to be scared as much as adults. We all grew up with fairy tales. I don’t remember any fairies in them, but I do remember child eating ogres, child eating witches, child eating stepmothers, and plucky little guys getting their revenge, be they Hansel and Gretel or Jack The Giant Killer.’

Zosia Knopp, Rights Director at Puffin Books, said, ‘We are delighted with the Disney-Hyperion deal which clearly reflects the brilliance and ambition of Charlie’s new series. There is a huge amount of interest from foreign publishers in the new books and we are confident of big international success with this exciting new project from one of Puffin’s biggest brand authors.’
Footnote:
The Enemy will be published in hardback by Puffin Books on 3rd September 2009

Posted by Beattie's Book Blog at 7:06 am