NEW ZEALAND POETRY TITLE LAUNCHED IN LONDON - a delightful and entertaining report from STELLA DUFFY
March 25, 2009
so much depends upon : Bornholdt/Manhire/poets/rain/train
Tonight I missed my tube stop, this Never Happens.
I was born in London, grew up in Tokoroa, came of age in Wellington, am an adult, a writer, a wife, have my life, in London. I Do Not miss my tube stop. It’s silly, it’s what people do when they’re new here, when they’re in love, when they’re easily distracted (or trying to be in a novel or a poem or a music video).
But somewhere between Manhire and Bornholdt (specifically, at the halfway page in Jenny’s ‘Wedding Song’, thinking yay, THIS will do for every next time I’m asked what’s a great poem to read at a wedding), I realised I had missed Stockwell and was at Clapham North. This made me laugh. And then run. And then there was the big old boring change from northbound on the Northern Line to Stockwell to southbound on the Victoria Line. And home. 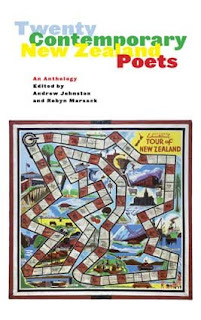 And here I am. Telling you to buy this book : “Twenty Contemporary New Zealand Poets”, published by Carcanet and in NZ by Victoria University Press'
And also Bill Manhire’s “Lifted”. Also Carcanet.Also VUP.
They are thin books you could miss your tube stop for.
Bill Manhire taught me American Lit at Victoria University of Wellington in 1983. Jenny and I did Drama Studies at Vic at the same time. I haven’t seen her since some time near then, but tonight, she and I ‘looked just the same’ - we both said so. I wasn’t being polite, she has always been tall and fine and well-cheek-boned. I think I look like an idea of who I might have been 25-odd years ago. I still feel like the same woman much of the time.
She has grown to be a writer, in another world, at the same time , over the same time that I have. I have read her work, online, every now and then, I know she is very successful and highly respected in New Zealand (she’s good, read her) - I know this possibly means the work isn’t as well known as it should be out of New Zealand - sometimes it is, but often it isn’t.
Marilyn Duckworth (who I will read with next week) is another should-be-better-known-internationally NZ writer.There are things we trade to be living here or there. The Tinakori hills or a French publisher. The long hot summer or the tube. A feijoa tree or Brockwell Lido. Closeness to Greece or proximity to the Bay of Islands.
And mostly it has nothing to do with career, mostly it has to do with our partners and our lovers and our hearts and the fact that we, most of us, end up living where our loved ones live. Or at least, where our closest loved one wants to live. Mostly it has to do with chance.
The penthouse at NZ House in the Haymarket is a great place to see people you haven’t seen for twenty-five years. The 18th floor view of central London on a bright night when the world has been cleaned with high-pressure rain all day, is glorious.
I told Bill Manhire (unlike many many NZ writers my age, he did not teach me creative writing, but the aforementioned American Literature) that he gave me Wallace Stevens and William Carlos Williams. He said didn’t that mean he gave me Emily Dickenson too.
And he did, but I would have found her anyway. I was a baby would-be-feminist in 1983, desperate for women’s voices, and there were so few we could read, so few published (still, yes, I know) I would have found Emily anyway. I might not have found Tea at the Palaz of Hoon. I would not have known about the red wheelbarrow. I would not have placed it often in my own and seen it so often in so many other people’s work, repeated time and again in various guises, so much depending.
I’m sure Bill Manhire is a great writing teacher, they all say he is. But I suspect offering William Carlos Williams and Wallace Stevens (and Emily Dickenson) is probably enough. It was for me.
Posted in sort of about writing
Footnote:
Bookman Beattie lifted this without your permission Stella, hope that is ok? It is such a super piece of writing and I am keen to get it to as wider audience as possible.
Check Stella's blog here. It is worth a visit.
Posted by Beattie's Book Blog at 1:57 pm