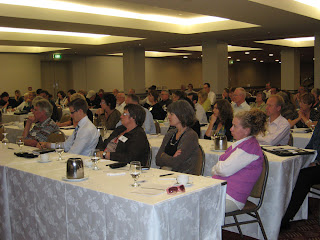 A diverse bunch of more than 100 turned up to the Hyatt Regency Hotel for the first seminar which proved to be an interesting, stimulating and challenging day. There were people from the book publishing world – editors, marketers, publicists, sales people – magazine publishers, web designers, authors, librarians and software creators and if they were like me they would have gone home at the end of the day pleased they had been there perhaps feeling a tad daunted and challenged but impressed and pleased at the air of co-operation prevailing among those present.
The speakers included the aforementioned Martin Taylor, Adrian Keane, MD of Pearson NZ, Neale Pitches, CEO/Publisher of South Pacific Press, Andrew Crisp of InfoGrid Pacific, Kathy Sheat of Copyright Licensing and by way of dvd four NZ publishing CEO’s – Tony Fisk of Harper Collins, Kevin Chapman of Hachette, Margaret Thompson of Penguin, and Karen ferns of Random House.
For me though the star was Martin Taylor.
He started proceedings with an entertaining, informative and accessible presentation he named The Rise and Fall and Rise of eBooks. It was a consummate performance and got the day off on exactly the right note.
Adrian Keane gave us A Glimpse at the Global Strategies of Major Educational Publisher, the four CEO’s gave us the same sort of glimpse but on trade publishing rather than educational, (I thought Tony Fisk’s contribution was especially valuable), then Andrew Crisp talked about the Production and Distribution of Digital Content.

During a working lunch, broken up into eight groups, we examined key issues from the morning sessions followed by an open forum with much participation and many question ably chaired by Martin Taylor.

The organizers of this series of seminars will be heartened by the turnout, participation and reaction to this first day. The co-operation between publishers was especially noticeable and gives one optimism for the next big thing in the book publishing world – the eBook and digital publishing.
If you are in Wellington or Christchurch and have an interest in digital publishing then be sure to attend.
Posted by Beattie's Book Blog at 9:17 pm

In the present economic situation if you are looking to get your message across to people and advertising your business without spending loads of money, then you can opt for traditional outlets like print advertising agencies. These agencies can offer you classified ad space at special discounts. This is also a great opportunity especially if you are setting up a new business or are tight on your advertising budget.

When you use a professional ad agency, you tend to receive an early notice of the special offers and prices and also a considerable reduction in the advertising rate for national press. So help your business grow by promoting it in the low priced publications. Use print media to cut your costs and boost your advertising efforts in this growing economic recession.