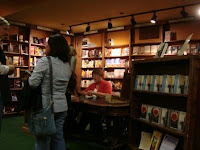 ON TOUR IN THE US WITH
NZ AUTHOR LINDA OLSSON

I really should write these notes straight away as I get back to my hotel at night: I am now in Tulsa, and Denver is already beginning to slip away. But I’ll try and retrieve some impressions from the murky depths of my memory.
Flying into Denver you can’t help noticing the backdrop of snow clad mountains. I immediately text my friend Ellen who now lives here and always says she is miserable. ‘It’s beautiful! Why do you complain?’ As I leave the following day, however, I text her again: ‘Well… I sort of understand. It’s grey. Unremarkable in every way.’
My hotel is nice, as usual. I have time for a short walk and end up in a book store where I have lunch. I realise it’s the same chain as the one where my evening event is scheduled, Tattered Covers, but another store. A

wonderful place to spend an afternoon. There is a café inside and an odd assembly of old tables and chairs are spread around the spacious store, so you can sit and eat surrounded by books. I reluctantly tear myself away and make my way back to my hotel to change and get ready for my events.
My escort is VERY professional, reed thin and heavily bejewelled. The events go well. There is an afternoon book club event followed by an early dinner at the home of a Swedish member. Then a speech and book signing at ‘Tattered Covers’. It surprises me to see so many turn up, perhaps 50 people. Some young, and some men, too! Yay! Great response and lots of questions. At least one I haven’t had before. A young guy asks me what is the most surprising result of my publishing success. I don’t know why, but before I have a moment to think I blurt out: ‘That I am not happy. I thought that would follow as a natural result. And it hasn’t.’

An early night, as I have a recorded interview with a radio book show that reaches eight states, Focus, on Clear Channel at 6.30 the following morning. I have no idea why this has to be done at this ungodly hour, but Lisa, my escort picks me up at 6am and off we go. It’s still dark. The radio building sits in darkness as we drive up, and my interviewer arrives just as we do. But it ends up being a really interesting session. The interviewer, Irene Rawlings, is of Polish ancestry and speaks Polish. She has read my book carefully and knows at least as much about it as I do. The half hour goes quickly.
We go straight from the interview to the airport. It’s Spring Break and unbelievably busy, but I have plenty of time. The process of taking off coat and jacket and shoes, unpacking my laptop and my toiletry bag and put it all in the provided trays has become a habit and no longer brings about a sweat.
I have time for breakfast before my flight to Tulsa, but airport breakfasts are not to be recommended.
I don’t think I will return to Denver.

As I walk into the terminal and the baggage claim at Tulsa airport I have to pass through sliding doors with a sign stating: ‘From this point, no return.’ It feels slightly ominous. But just outside there is my escort, Jeff Martin. It’s the first time my escort has taken the trouble to pick me up before the baggage claim and help me pick up my suitcase (which I am again very happy to see appear on the belt). Jeff takes me to my hotel, this time a typical conference hotel on the grey plains outside the city and overlooking the highway.
There is nothing of interest within walking distance and no sidewalks. But it rains lightly, so that doesn’t matter much. An hour later Jeff picks me up again and we have time for a little sightseeing before my event at the local Barnes & Noble.
We drive through Greenwood, the area of the city infamous for the race riots that took place here in 1921. Greenwood was then a racially segregated self contained area inhabited by blacks only. It had gained considerable wealth, had its own banks, its own police and fire engines. Although the official reports at the time stated that 39 people were killed, ten of those white, it is now estimated that at least 300 blacks died, perhaps as many as 3,000. Even 300 dead would make this riot the worst in US history. It’s hard to understand now.
Today, the substantial houses look poorly kept with weeds dotting the dry lawns. Jeff tells me the area is not predominantly gay. There is not a person in sight.
That goes for the city as whole, this Saturday afternoon. We drive through other parts of the city that hold grand old mansions, clearly demonstrating the opulence created by the oil. Jeff points out several art deco buildings of note, one the Boston Avenue Methodist Church which is quite spectacular. Also, he shows me the Bank of Oklahoma Tower at the end of Boston Street. It looks startlingly like a lone, shrunken World Trade Center tower—which is what it is. It was designed by Minoru Yamasaki, the Twin Towers’ architect, for the Williams Center, an urban renewal project planned in imitation of the World Trade Center and completed three years after it, in 1976.
The overall impression is slightly sad, though. The streets are empty, the buildings look silent and closed. There are very few shops and they look closed, too. Jeff says it seldom rains here, and when it does people stay indoors.
The event is in a typical Barnes & Noble store. Plastic chairs set up in the midst of a sea of book shelves. It’s three o’clock and a reasonable number of customers are browsing the aisles. Few are interested in sitting down, though, and I end up talking to a handful of listeners. One of them turns out a very interested one, though, with lots of questions, and it turns more or less into a discussion about writing rather than a speech. And at the end of the session a dozen books get sold. And I sign about thirty copies for the store. ‘A book signed, is a book sold.’ 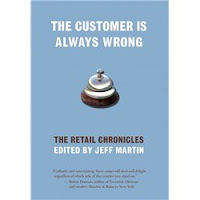 In the car afterwards we discuss the turnout. I already know that Jeff is a published author, with more books under his belt than I have. He looks to be about thirty…
He says he once spoke to one single guest at an event, and I remember an event in LA during my first tour where the audience consisted of my escort, a friend of mine who happened to live in the area, an Asian man and a little child who sat down because they were tired, I think, and a scary looking man in a baseball cap that kept staring at me right through my speech. You never know what you will get at these free events. And as Jeff points out, it’s probably more economical for my publisher to freight me to Tulsa than to keep me another night in Denver.
I feel slightly guilty, though, as if I am responsible.
In the evening Jeff takes me for dinner at a quaint Mexican place. We talk about writing, publishing, Obama, morals, ethics … It’s extraordinary how similar our tastes seem to be. We have the same preferred authors. Read the same magazines. Yet there is a world between us in every respect. The evening goes too quickly. I realise it’s the first time my escort has taken me out for dinner.
Jeff drops me off at my hotel and we agree to stay in touch.
There is no mini bar in my room, so I have a glass of water and fall into bed. It’s been a long day.
Posted by Beattie's Book Blog at 3:06 pm

It's funny how you find blogs. Mentioning the Boston Street Methodist Church did it for me. A truly spectacular art deco buildings and I've enjoed reading about your travels.

Oh I love the comment blurted out, about being a successful novelist not necessarily making any difference to the happiness quota - what a lovely blog - and congratulations on your success and your tour. I know "Mick" in the local post office who is a friend of yours.