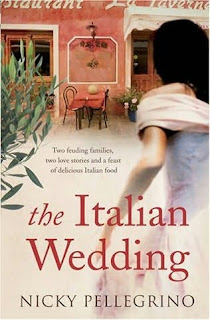 It seemed like a genius plan. Having written two novels while working full time as a magazine journalist I was feeling a bit low on energy and ideas. So instead of racking my brains for a plot for book three, I decided to get my English mother to write down the story of how she met my Italian father back in 1959.
It’s the romantic and daring tale of how she hitched from Liverpool to Rome with two friends and ended up coming home with a husband. I had visions of my mother producing 30,000 words or so that I would flesh out into a fabulous novel. Cheating a bit, yes, but genius all the same.

Unfortunately it didn’t quite work out like that. My mother’s reminiscences filled only a couple of pages - barely enough for a short story. It was a long time ago, she insisted, and that was all she could remember.

But by then I was in love with the idea of writing a novel about discovering who your parents really are – not just the people who nurtured and raised you but had crazy adventures, wild passions and deep disappointments.

So I tried to remember the stories I’d been told when I was growing up. Of course, back then I was a dreamy child who only half-listened to anything that was said to me. And I didn’t much like being half Italian. It singled me out from the other kids, I had a different name, ate different food. When my father tried to talk to me in Italian I stuck my fingers in my ears and cried. And when his friends came round to our little bungalow to play cards and argue in loud voices I steered well clear.

There were summers we went to Italy but we never visited the places they photograph for postcards. My father comes from a town called Giugliano in Campania. It’s not far from Naples, but well off the tourist trail and our holidays there involved an awful lot of sitting round in dusty yards or hot kitchens listening to adults yabber in Italian.

Although I was officially half-Italian, I never felt like one of them. I didn’t speak the language fluently enough to hold a proper conversation. And I was a shy child. My extrovert brother Vince had the confidence to barrel up to a bunch of strange kids and join their football game while mainly what I did was sit around and observe people.

I saw the way they lived life bigger than we tended to. They shouted more, talked with their hands, let their passions get the better of them. And it was very clear to me that I had much more freedom than my female cousins. They left school young, helped out at home and then were expected to marry and have children. Their lives revolved round the kitchen and the family.

When I started writing fiction the memories of those summers in Italy came back to me and laced themselves through my first two novels, Delicious and The Gypsy Tearoom. But for my third book I needed fresh ideas and new memories. And all I had were those couple of pages of my mother had typed up for me.

As another writer once said to me, if you don’t live then you have nothing to write about. And as luck would have it real life intruded on my writing. To pay the bills I took a part-time job – this time editing a bridal magazine, NZ Weddings. As I styled fashion shoots and researched articles I became fascinated by everything from the designing of glorious frocks to the ribbons on the wedding favours that match a detail in the invitation...

Writing a novel is a bit like cooking something special. Ideas have to marinate for a while and then you layer flavours until the balance is right. From my sudden interest in weddings Pieta Martinelli, bridal designer, was born. Like me she was half Italian and also, just like me, she didn’t know enough about her parents. But when Pieta and her mother start spending time together while they bead her sister’s wedding dress she begins to uncover the secrets that have made her family what it is.

The Italian Wedding is set mostly between Rome and London and includes a few old family recipes I’ve stolen from my father. But in the end my parent’s history only provided the soffritto for book, the base that gives it its flavour. The story stretched way beyond that and became something else altogether ….So much for my genius plan!

CROMWELL– Sunday April 5
Brunch with Nicky Pellegrino in conjunction with Paper Plus Cromwell
11am at Northburn Station.
Tickets $25 includes lunch and entertainment, on sale 9am March 20 at Cromwell, Alexander and Queenstown Paper Plus stores.

AUCKLAND – Wednesday April 8
An Italian Wedding Lunch in conjunction with Dymocks Smales Farm
Tickets are $20 and include a boxed lunch with punch or glass of wine, tea and coffee all catered by Columbus Cafe, along with two hours free parking. There will be prizes for the best wedding outfit and all guests will go in the draw to win a selection of books. Reservations essential, contact Dymocks Smales Farm 912 6850 or smalesfarm@dymocks.co.nz
The Italian Wedding is published by Orion, http://www.hachette.co.nz/ . NZ$38.99
Nicky's story on writing The Italian Wedding first appeared in the Hearld on Sunday yesterday and is reproduced here with their permission.
Posted by Beattie's Book Blog at 7:06 am

Are The Italian Wedding and the earlier books available in Australia?