Eternal exile of Milan Kundera
The famed author's life has mirrored that of his most famous emigre character,
writes Geordie Williamson March 28, 2009
Article from: The Australian
FOR those of a certain generation, the sight of a Milan Kundera paperback can provoke a jolt of involuntary memory every bit as effective as Proust's madeleine.

Milan Kundera by Eric Lobbecke
Faber & Faber's black-and-white editions of his novels and stories were once the obligatory intellectual furniture of a thousand student bookshelves.
Titles such as Life is Elsewhere, The Book of Laughter and Forgetting and The Unbearable Lightness of Being promised a kind of metaphysical bawdy, mixing high seriousness and low humour, and subverting traditional realism with elements of the surreal.
But these fictions were always more than Iron Curtain exotica.
Kundera's talent, though unevenly applied throughout his career, has always been impressive in essence and deeply original. His method has been to graft abstract philosophical ideas with fictional invention to create narrative cyborgs: intellectually speculative, formally experimental, intermittently essayistic, yet warm-blooded, grounded in human experience. His characters are not mere automatons, programmed with pure theory and set to shuffling: they are sophisticated neural networks that grow through those dilemmas of love, history, nation and politics the author obliges them to confront. 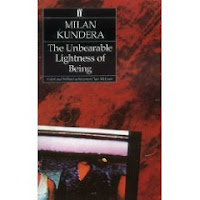 Few, for example, have read and fewer understand German philosopher Martin Heidegger when he writes about truth and untruth, and their relation to human freedom (me included). But everyone can appreciate Sabina, the embodiment of his ideas in The Unbearable Lightness of Being.
Sabina is one of the four central characters of Kundera's best-known and most successfully realised fiction. She escapes from communist Czechoslovakia to the West, only to be ground down by what Janet Malcolm, in her review of the novel, called a perpetual struggle against theunbearable banality of her situation as an emigre artist.
Read the full piece at The Australian.
Posted by Beattie's Book Blog at 8:20 am