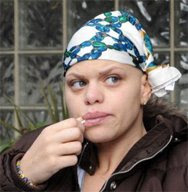 From The Times
March 24, 2009
Jade Goody's death followed by row over rival books and plan for film
Patrick Foster, Media Correspondent
The life of Jade Goody,(pic left, Getty Images), the reality television star who died on Sunday, could be turned into a film, her friends said yesterday. Meanwhile, publishers scrambled to bring out books about the former Big Brother contestant.
While the life of the 27-year-old may have passed by anyone who did not watch the Channel 4 reality show or failed to pick up OK! magazine, her death from cervical cancer has attracted huge interest and, perhaps inevitably, growing tension over the scramble to profit from her story.
By yesterday more than 500 floral tributes had been laid outside Goody's home in Upshire, Essex.
Her funeral, certain to dominate the 24-hour news channels, will take place on Saturday week.
Goody's death has prompted the trustees of her estate to put together proposals for a biographical film.
It has also sparked a row between publishers with a renamed autobiography expected to go on sale at the weekend, in direct competition with her official “cancer diary”.
Danny Hayward, a friend of Goody and one of three trustees of a fund set up to provide for her two children, Bobby, 5, and Freddie, 4, told The Times that a film of her life was being discussed. “Her story lends itself to a biographical film,” he said. “She's captured the mood of the nation. We're talking about it, and we welcome approaches. We want it to tap into raising awareness of cervical cancer.”
It is understood that the family are keen on approaching Nick Love, the British director behind The Football Factory, the 2004 film about hooliganism, who also worked as executive producer on Bronson, the recently released biography of the man dubbed Britain's most violent prisoner.
Love could not be reached yesterday, but sources at his company, Vertigo Films, said that he was “very flattered” about the suggestion and that his involvement would depend on his work schedule.

Sources close to Goody's family said that they were furious with John Blake Publishing, which has renamed the paperback release of Goody's second book, Catch A Falling Star, published in September, as Jade: Fighting to the End.
The publisher has also changed the front cover to include her dates of birth and death, despite the book containing no reference to her battle against cancer. “It is being passed off as current, when it isn't,” a friend of Goody said.
The book is being rushed to stores and is expected to be on the shelves by the end of this week, where it will be in direct competition with Forever in My Heart, Goody's official “cancer diary”, published by HarperCollins, which is owned by News Corporation, the parent company of The Times.
A proportion of profits from the HarperCollins book will be donated to Marie Curie Cancer Care. A spokeswoman for the publisher said that it was scheduled for release in late April, but that it may be brought forward.
John Blake, of John Blake Publishing, denied that he was cashing in by renaming his company's book. He said: “The advance has been earned back and all the royalties from ours will go to the boys.”
The full Times report, including video footage here.
Posted by Beattie's Book Blog at 6:31 am