Writing a Strong Lead Is Half the Battle 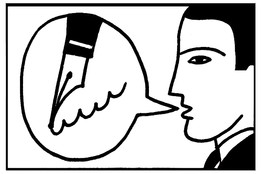 You're wading around in your notes, getting nowhere. You don't see a structure for the piece you're trying to write. You don't know what to do. So you stop everything and hunt through your mind for a good beginning, a good way to scissor in. Then do it; write it; get a lead on paper.

If the whole piece of writing is not a long one, you may plunge right on and out the other side and have a finished draft before you know it. But if the piece is to have some combination of substance, complexity and structural juxtaposition, you might begin with that workable lead and then be able to sit back and think about where you are going and how you plan to get there.

Writing a successful lead, in other words, can illuminate the problem for you and cause you to see the piece whole, to see it conceptually, in various parts, to which you then assign your materials. You find your lead, you build your structure, you are now free to write.

What is a lead? For one thing, it is the hardest part of a story to write. Here is an egregiously bad one from an article on chronic sleeplessness: "Insomnia is the triumph of mind over mattress." Why is that bad? It's not bad at all if you want to be a slapstick comedian. But if you are serious about the subject, you are indicating at the outset that you don't have confidence in your material, so you are trying to make up for it by waxing cute.

I have often heard writers say that if you have written your lead, you have in a sense written half of your story. Finding a good lead can require that much time, through trial and error. You can start almost anywhere. Several possibilities will occur to you. Which one are you going to choose? It is easier to say what not to choose. A lead should not be cheap, flashy, meretricious, blaring: After a tremendous fanfare of verbal trumpets, a mouse comes out of a hole, blinking.

Blind leads—wherein you withhold the name of the person or subject you are writing about and reveal it after a paragraph or two—range from slightly cheap to very cheap. There's nothing inherently wrong with them, but you should ration such indulgences. A blind lead is like a magician pulling a rabbit out of a hat, but the ears were sticking up from the get-go. Be conscious of the risk—of what is often wrong with such things—and then go ahead and try them. In this or that piece of mine, I have felt that a blind lead was by far the best choice. But not very often.

All leads, of every variety, should be sound. They should never promise what does not follow. You read an exciting action lead about a car chase up a narrow street. Then the article turns out to be a financial analysis of debt structures in private universities. You've been had. The lead, like the title, should be a flashlight that shines down into the story.

A lead is a promise. It promises that the piece of writing is going to be like this. If it is not going to be so, don't use the lead. A lead is good not because it dances, fires cannons or whistles like a train, but because it is absolute to what follows.

—Mr. McPhee, a Pulitzer Prize winner, writes for the New Yorker, teaches at Princeton and has penned 28 books.

Footnote:
Thanks to Ray Richards, Godfather of the NZ book publishing industry, for bringing this story to my attention. I thought it would be of special interest to my writer visitors.
Posted by Beattie's Book Blog at 1:32 pm