A new fictionalised account tries to unravel the dark secrets of the creator of Moby-Dick
Robert McCrum The Observer, Sunday 30 January 2011 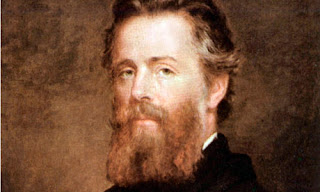 
On 5 August 1850, a boisterous party of writers and publishers climbed Monument Mountain in Massachusetts, on roughly the American equivalent of a hike in the Lakes. Among the literati on this famous excursion were Nathaniel Hawthorne, aged 46, the author of The Scarlet Letter, a contemporary sensation, and Herman Melville who, after a very successful debut (Typee), was struggling to complete an unwieldy coming-of-age tale about a South Seas whaler.

Melville, who was just 31, had never met Hawthorne. But it's no exaggeration to say that, after a day of open-air larks, a quantity of Heidsieck champagne, several impromptu toasts and a sudden downpour, the younger man was enraptured with his new friend who had, he wrote, "dropped germinous seeds into my soul". Rarely in Anglo-American literature has there been such a momentous meeting.

It was an attraction of opposites. Hawthorne, from an old New England family, was careful, cultivated and inward, a "dark angel", according to one. Melville was a ragged, voluble, romantic New Yorker from brasher mercantile stock. But both writers had hovered on the edge of insolvency and each was a kind of outsider.

The two men began a fervent correspondence. Melville became so infatuated that he moved with his wife and family to the Berkshires to become Hawthorne's neighbour. Thus liberated, fulfilled, and inspired to say "NO! in thunder" to Christianity, he completed Moby-Dick, or, The Whale. After an early reading of the manuscript – another inscrutable moment – Hawthorne acclaimed it in a letter that remains, tantalisingly, lost.

All we have is Melville's ecstatic response ("Your heart beat in my ribs and mine in yours, and both in God's..."). So how homoerotic was this friendship ? No one will ever know. It remains one of the mysteries of American letters. All we can say for certain is that, after climbing Monument Mountain, Melville's creative genius was somehow released.

Everything about Melville seems to illustrate the enigma of creativity. If ever a writer was a mystery inside a puzzle, wrapped in a riddle, it's the author of Moby-Dick. His masterpiece is ostensibly about one man's quest to kill a whale, yet it has become the supreme American novel. Its opening sentence is just three words ("Call me Ishmael"), but it summons a universe of self-invention.

Robert McCrum's full piece at The Observer
Posted by Beattie's Book Blog at 10:57 am