A long sentence served for a thrilling betrayal

Geordie Williamson in The Australian January 22, 2011 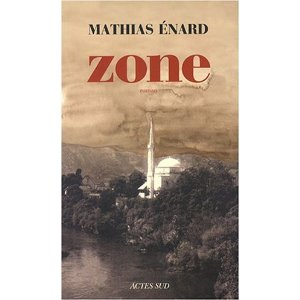 A RENEGADE French spy with a false passport and a briefcase full of computer discs sits on the afternoon train from Milan to Rome.

In the coming hours he means to sell a tranche of state secrets -- decades worth of dirty laundry accumulated by his nation's intelligence services -- before embarking on a new life, far away. For the time being, however, he has no one to talk to but the reader and nowhere to visit but the past. Over the course of the journey he returns, through a fog of booze and amphetamines, to the ideas and events, the passions and enmities that have brought him to this point.

Though the precis ticks many of genre's boxes, to describe Mathias Enard's Zone -- one of the more breathlessly received French novels of recent years, now elegantly translated into English by Charlotte Mandell -- as a spy fiction is a bit like calling Crime and Punishment a murder mystery. To begin with, the book is formally adventurous: it consists of a single, 517-page sentence made up of a series of boundary-less clauses, sometimes punctuated and sometimes not, that otherwise rely heavily on soft stops such as semi-colons and comma splices to slow the barrelling prose. The result is closer to James Joyce than John le Carre.

In terms of content, too, the author is less interested in the conventional tale of cross and double-cross than with the psychology of betrayal. So, instead of a Bond-style spectacle, we get a meditation on honour, belief, fealty and patriotism. In place of an espionage thriller we find a historical and philosophical investigation into the human propensity to bend high ideals into justifications for bloodshed and tribal hatred.

It helps that Francis Servain, to give the spy his birth name, is a walking travesty of all that is good and noble. From his quiet, orderly, engineer father Servain inherited the tidiness and superficial polish of the French bourgeoisie. But from his Croatian concert pianist mother he received a heavier legacy. His maternal grandfather was a senior member of the Ustashi, a separatist movement whose murderous practices in pursuit of a racially pure Croatian state during World War II shocked even the German Nazis.

Full review in The Australian.
Posted by Beattie's Book Blog at 7:39 am