In light of Hone Harawira’s recent media attention, the floor will soon be his to elaborate on his political perspective with regard to the state of Maori rights. Harawira will be joined by other influential political figures in a discussion at this year’s Waitangi Day activities.
The discussion includes panellists Margaret Mutu,(photo right), Metiria Turei and Moana Jackson with broadcaster Julian Wilcox chairing the event. 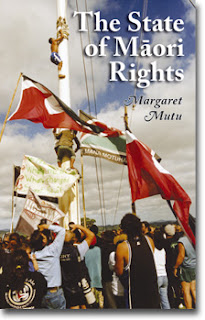 This political dialogue will be part of the book launch for Margaret Mutu’s The State of Maori Rights, published by Huia Publishers. The book will retail for $45.00 and is due for release on 4 February in bookstores nationwide.

The book launch and panel discussion, starting at 9am, will kick off a series of events hosted in the Political Forum tent at Tau Rangatira, Waitangi. Audience members will have the chance to hear about some of the country’s major concerns about Maori participation, involvement and representation.

Harawira is far from reticent when it comes to voicing his concerns for Maori and was quoted in the national news of stuff.co.nz as saying, ‘[Prime Minister John Key] didn't even mention one cent going to any Maori project anywhere in the country for the rest of the financial year, [which] suggests that my column is very much in line with what Maori people are concerned about in the relationship of the Maori Party with National’.

Margaret Mutu’s, The State of Maori Rights, brings together a series of reviews that illuminate issues affecting Maori over the past fifteen years providing a Maori view of events and issues that occurred between 1994 and 2009 which had significant impact on Maori.

The book documents the increasing determination of Maori to assert their rights as the indigenous people of Aotearoa New Zealand over this fifteen-year period. Key events covered include the 1994 fiscal envelope policy debate, the 50,000-strong protest march against the foreshore and seabed legislation, media attacks on Maori MPs, and Maori initiatives and success stories.

About the author:
Professor Margaret Mutu (Ngati Kahu, Te Rarawa, Ngati Whatua) is head of Maori Studies, University of Auckland, and author of two previous books. She is a mandated representative of Ngati Kahu nationally, internationally and at the United Nations Permanent Forum for Indigenous Issues. She is also chief negotiator for the settlement of Ngati Kahu’s Treaty claim.
Posted by Beattie's Book Blog at 1:22 pm