Saturday Morning guest information and links:
8:12 Alex Ortiz
Alex Ortiz is a student at American University in Cairo, and a graduate in Arabic literary translation and Middle Eastern studies from Brown University. He has been streaming video of live protests in the Egyptian capital despite the blocking of internet services by government agencies.

8:25 Seif Da'Na
Seif Da'Na is an associate professor of sociology and international studies at the University of Wisconsin-Parkside, specialising in the Middle East and North Africa.

8:35 William Hague
British politician William Hague served as Leader of the Conservative Party from June 1997 to September 2001 and is currently the Foreign Secretary and First Secretary of State under David Cameron. He is the author of biographies of William Wilberforce and William Pitt the Younger.
www.conservatives.com/People/Members_of_Parliament/Hague_William.aspx

9:05 Innes Asher
Professor Innes Asher is Head of Paediatrics: Child and Youth Health at the School of Medicine, University of Auckland, and paediatrician at Starship Children's Health. She is the chair of the International Study of Asthma and Allergies in Childhood (ISAAC), a unique worldwide epidemiological research programme established in 1991 to investigate asthma, rhinitis and eczema in children, which has become the largest worldwide collaborative research project ever undertaken, involving more than 100 countries and nearly 2 million children. The ISAAC 20 Year Symposium was held on 27 January in Auckland. Professor Asher is also the paediatrician/children's health spokesperson for the Child Poverty Action Group.
www.fmhs.auckland.ac.nz/som/staffct/staff_details.aspx?staffID=6D617368303237
www.cpag.org.nz/about-us/our-people/

9:45 Alison Ballance
Biologist, film-maker, writer and broadcaster Alison Ballance has been involved in making 16 wildlife documentaries for the Dunedin-based television production company NHNZ, and is the author of 28 books, the most recent of which is Kakapo: Rescued from the Brink of Extinction (Craig Potton, ISBN: 978-1-877517-27-3). Alison co-hosts the Radio New Zealand science programme, Our Changing World.
www.radionz.co.nz/national/programmes/ourchangingworld

10:05 Playing Favourites with Danny and Florence Mulheron
Danny Mulheron has acted in, written and directed award winning plays for more than twenty years. His work in television includes co-writing, directing and producing the comedy series Seven Periods with Mr Gormsby, and directing for the BBC, ITV, and Seven Network Australia. His feature length documentary about his grandfather, The Third Richard, is available on DVD. Danny is the director of a new play, The Motor Camp, based on his original story and scripted by frequent collaborator Dave Armstrong. The world premiere season is now playing at Wellington's Circa Theatre (to 19 February), with a cast that includes Danny's daughter, Florence.
http://filmshop.co.nz/products-page/military--war/the-third-richard/
www.circa.co.nz/circatheatre/Shows/The-Motor-Camp

11:05 Karli Thomas
Karli Thomas has been an oceans campaigner with Greenpeace since 2005. She will discuss the worldwide decline of tuna and other fishing stocks.
http://www.greenpeace.org/ 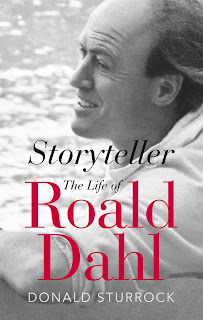 British writer, producer and director Donald Sturrock has made more than 30 documentaries, including biographical features about William Trevor, Robert Graves, Jennifer Johnston and Roald Dahl.
Since 1992, he has been the artistic director of the Roald Dahl Foundation, masterminding an ambitious project to create an international library of new orchestral works and operas for children, based on the stories of Roald Dahl. He is the author of the authorised biography, Storyteller: The Life of Roald Dahl (HarperCollins).