'I'm a writer. I've come to terms with that'

Gaynor Arnold tells James Kidd about her late career change, and how a Booker nomination can change your life
The Independent, Sunday, 30 January 2011 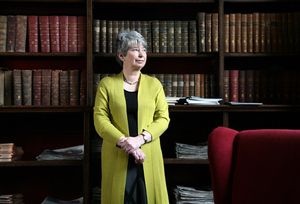 When Gaynor Arnold hit the headlines in 2008, the headlines went something like this: "Sixty-three-year-old social worker makes big splash with debut novel".

The novel in question was Girl in a Blue Dress, a thinly veiled retelling of Charles Dickens's marriage narrated by his jilted wife, Catherine, that was longlisted for two prestigious literary prizes – the Man Booker and the Orange.
It was a great story: think Rocky retold by Alan Bennett. In fact, the only person who seems immune to its charms is Arnold herself. "At first, I was absolutely flabbergasted by the interest. Then I realised that of the 13 people on the Booker longlist, only three were women. I was unknown, a social worker and not in the first flush of youth: those were my unique selling points." She pauses. "'Sixty three-year-old social worker' – I got a bit fed up with that."

Two years on, Arnold has published her second book, a short-story collection entitled Lying Together. So, what is the story this time? Has success changed her? Has she failed to adjust to her new life? Or has her sudden flash of fame made no difference whatsoever? The answer combines a little of each.

We meet in Birmingham, where Arnold has lived for 35 years. She chooses the pleasingly 19th-century atmosphere of the Birmingham and Midland Institute in the city's private library. "It has a card index," she notes wistfully. The headline this time could read: "Admired novelist retires from social work." After 40 years, Arnold stepped down in 2009. "I'm a writer now. I think I have finally come to terms with that."

In many respects, the transition has been smooth. Arnold certainly looks and acts the part: dressed in an elegant black outfit and mustard coloured cardigan, she poses happily for pictures. But this newfound literary identity is not without its pressures. Unknown no longer, Arnold feels the weight of anticipation surrounding her new book. "I have terrible cold feet. People expect things after last time." One writer friend said her readers might be quite shocked, because Lying Together is so different from Girl in a Blue Dress.

Written over a number of years, its 15 stories explore many scenarios, moods and characters. Some are historical: "Looking for Leslie Howard" narrates a tentative romance on the eve of World War Two. But rather more occur in the recent past, and explore the inner lives of ordinary people: "Salad Days" offers a deceptively terrifying tale of alcoholism and domestic violence; the double-header "Mouth" and "Angel Child" relates a disastrous mother-daughter relationship from each party's perspective.

As these contemporary plots imply, Arnold hasn't entirely left social work behind. Her conversation is often liveliest when discussing her former job, and her imagination continues to be fired by the people and situations she encountered professionally. "I hadn't particularly thought that the stories came out of my social work experience, until I saw them all together in a collection."

It is tempting, probably too tempting, to read Lying Together in terms of Arnold's own recent past: many of the stories confront the crises that follow lives ground to a halt or bereft of fresh inspiration. In Arnold's case, this moment arrived shortly after she turned 40, and was balancing a stressful job with raising a family. "I remember having a bit of a moan to an old university friend. We were wondering what we had done with our lives. My friend asked me what I really wanted to do. I said write. It became a lovely reaction to the rest of my life."

Full story at The Independent.
Posted by Beattie's Book Blog at 11:12 am