The Battle for Idol 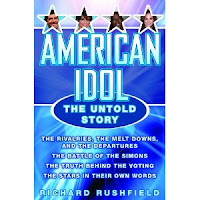 Richard Rushfield is a four-year veteran of the American Idol beat and the author of a memoir, Don't Follow Me, I'm Lost. His new book, American Idol: The Untold Story, goes behind the scenes of the most popular TV show of the decade.

An exclusive excerpt featured in Newsweek this week from American Idol: The Untold Story reveals the power struggle that pitted the almighty Simon Cowell against his longtime partner, Simon Fuller. Rushfield discussed Cowell’s Idol journey with him, as well as show insiders, and the revelations include:

• Speaking about Fuller’s lawsuit against him after he created X Factor in the UK, Cowell tells Rushfield: “I didn’t steal anything. I just made a new show as he made new shows,”

• Before Idol, Cowell was nearly cast as “mean judge” in another British talent show, Popstars, when his mentor, Jonathan King, who was the show’s first choice, went to prison for sexually molesting five boys.

• When Idol was on its way to America, Cowell nearly backed out, worried that his harsh persona would not translate to the more politically correct U.S. airwaves.

• In the year that followed, Idol’s fourth season, when Fuller was suing Cowell, the two former friends exchanged nary a word.

• In the summer of 2009, with one more year left on Cowell’s contract, Fox—represented by Rupert Murdoch himself—offered Cowell a staggering deal: to continue his services on Idol as well as to bring X Factor to America, Cowell would be paid in the neighborhood of $130 million a year.

American Idol begins its 10th season this week without its star judge, Simon Cowell, who rode a penchant for cutting comments to international TV stardom. Last year Cowell announced he was quitting the show, walking away from one of the most lucrative contracts in broadcast television to run his own talent competition, The X Factor, which premieres in the fall. He’d threatened to leave for years, and Idol insiders say this became inevitable as far back as 2004, when the show’s other Simon—Simon Fuller—sued Cowell in a British court.

Longtime friends, then wildly successful collaborators, the two Simons are similar in many ways. A year apart in age, both sport flattop haircuts, and both worked at the “pop” iest edges of the U.K. music business. Beyond the shared name and the superficial resemblance, however, the two men are quite different. Fuller—shy, gracious, and wary of the limelight—muscled his way to success as an innovative outsider, building the first truly modern media empire around the Spice Girls, only to be summarily dropped as their manager in 1997.
Full piece at The Daily Beast.
Posted by Beattie's Book Blog at 8:06 am