Helen Trinca in The Australian January 29, 2011 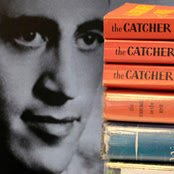 Researchers are ready to rush the archives of the University of East Anglia now that it holds a cache of newly discovered letters from Catcher in the Rye author J.D. Salinger. (Photo left - Amy Sancetta - AP)

But don't hold your breath for publication of the words of the American literary legend who died last year aged 91. The Salinger estate, which holds copyright on the letters, will continue its fierce protection of "Jerry", whose seclusion after his works were famous became his brand.

The university says on its website the estate has already confirmed that although academics and the public can view the letters, written to Donald Hartog, an English friend, in the 1980s and 90s, permission for publication will not be granted.

No surprises there. Last year, shortly after Salinger's death, I tried for access to letters he wrote in the 1950s and 60s to his then British publisher, Jamie Hamilton, the founder of Hamish Hamilton. I'd come across the letters in 1993 when, based in London with this newspaper, I reported the publication of the uncensored version of Catcher that reinstated the F-word and other language deemed too colourful for British (and by extension, Australian) readers when the book first appeared in 1951.

Hamish Hamilton had been taken over by Penguin, and the publishers were keen to get the story out. If I popped around to their offices, I could have a look at a manila folder, usually held at the University of Bristol as part of the Hamish Hamilton archive, containing a handful of letters from Salinger debating the pros and cons of taking the swearing out of Catcher and other matters.

The catch was that I could read Salinger's side of the correspondence, but not report on it. I wrote at the time: "Reading through the file is a thrilling as it is frustrating.
"Salinger the mystery man comes alive through his neat typewriting and strong, racy hand, but there is no chance of passing any of the material on."

It felt vaguely invasive: Salinger was still alive and had chosen privacy over a public life. Reading his letters broke through the wall. But when he died in January last year, I applied to Bristol for access with a view to publishing material. No go, said Penguin. The estate was "quite unlikely" to give permission. I dropped the idea.

According to those who have seen the East Anglia letters, they show Salinger as far less reclusive than imagined. But if the estate sticks to its hard line on publication, we will just have to take their word for it.

And a story in The Telegraph.
Posted by Beattie's Book Blog at 11:03 am