PublishersLunch
Amazon posted their first list of just over 20 Kindle Singles, short nonfiction digital works "typically between 5,000 and 30,000 words." With no page counts, consistent with the Kindle ethos, consumers will have only price (currently ranging from 99 cents to $2.99) and kilobyte counts to estimate how long these works are prior to purchase. 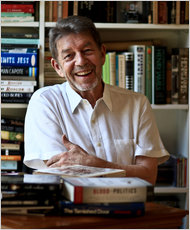 Among the titles is a version of Pete Hamill's piece on immmigration, THEY ARE US, originally intended as a 40,000 to 50,000-word digital original from Little, Brown last fall. Hamill (photo above  by Fred R Konrad - NYT) had not delivered as intended, and reportedly backed off the project due to his wife's illness. Priced at 99 cents and running 91 kilobytes, it would appear to be a shorter version.

Other contributing authors include Jodi Picoult (writing on parenting), Darin Strauss, Evan Ratliff, Mark Greif and Jonathan Littell. The site says the first offerings were "selected by our team of editors."

Kindle Singles home
Posted by Beattie's Book Blog at 6:28 am