In October, children’s author Eric Carle (left) will publish The Artist Who Painted a Blue Horse, a book inspired by the work of “banned Expressionist painters” the author first encountered as a student in World War II-era Germany. 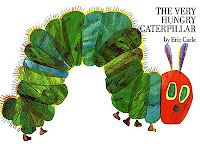 Although he has written over 70 books, Carle is best known for two classic titles: The Very Hungry Caterpillar and Brown Bear, Brown Bear, What Do You See? Scheduled for publication in October 2011, Penguin Young Readers Group’s Philomel imprint has planned a first printing of 300,000 copies.

Here’s more from the release: “[The book] is inspired by the work of the great Expressionist painter Franz Marc, a founder of the artists’ group known as Der Blaue Reiter (The Blue Rider), who famously used abstract blue horses in his paintings. Eric Carle’s new book tells the story of an artist who paints the world as he sees it—a red crocodile, an orange elephant, a purple fox, a black polar bear. His brilliant new work will captivate and educate readers with its colorful and magical story of Expressionist art and the imaginative leaps of a painter.”
Posted by Beattie's Book Blog at 11:53 am