Leave the libraries alone. You don’t understand their value. 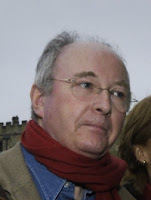 Best-selling author Philip Pullman spoke to a packed meeting on 20 January 2011, called to defend Oxfordshire libraries. He gave this inspirational speech, which we are very pleased to co-publish with openDemocracy.

You don’t need me to give you the facts. Everyone here is aware of the situation. The government, in the Dickensian person of Mr Eric Pickles, has cut the money it gives to local government, and passed on the responsibility for making the savings to local authorities. Some of them have responded enthusiastically, some less so; some have decided to protect their library service, others have hacked into theirs like the fanatical Bishop Theophilus in the year 391 laying waste to the Library of Alexandria and its hundreds of thousands of books of learning and scholarship.

Here in Oxfordshire we are threatened with the closure of 20 out of our 43 public libraries. Mr Keith Mitchell, the leader of the county council, said in the Oxford Times last week that the cuts are inevitable, and invites us to suggest what we would do instead. What would we cut? Would we sacrifice care for the elderly? Or would youth services feel the axe?

I don’t think we should accept his invitation. It’s not our job to cut services. It’s his job to protect them.

Nor do I think we should respond to the fatuous idea that libraries can stay open if they’re staffed by volunteers.
What patronising nonsense. Does he think the job of a librarian is so simple, so empty of content, that anyone can step up and do it for a thank-you and a cup of tea? Does he think that all a librarian does is to tidy the shelves?
And who are these volunteers? Who are these people whose lives are so empty, whose time spreads out in front of them like the limitless steppes of central Asia, who have no families to look after, no jobs to do, no responsibilities of any sort, and yet are so wealthy that they can commit hours of their time every week to working for nothing? Who are these volunteers? Do you know anyone who could volunteer their time in this way?
If there’s anyone who has the time and the energy to work for nothing in a good cause, they are probably already working for one of the voluntary sector day centres or running a local football team or helping out with the league of friends in a hospital. What’s going to make them stop doing that and start working in a library instead?