In a worthy plot twist and a blow for the millions of fans of Stieg Larsson, the Swedish author's publisher seemed to confirm Wednesday that there will be no fourth volume in the popular "Millennium" series, left incomplete at the time of his sudden death.

“There is no fourth book from Stieg Larsson on the horizon,” Paul Bogaards from Alfred A. Knopf told Word & Film on Wednesday. “Only the estate, controlled by his family [Joakim and Erland Larsson], can authorize publication of a fourth book, and they have no intention of doing so at the moment.” 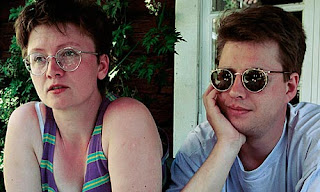 Larsson's longtime partner Eva Gabrielsson (photo above Scanpix/PA-1990) had raised hopes of a new installment of the crime series -- which so far sold more than 45 million copies worldwide -- in a 160-page memoir published in France, Sweden and Norway.

Larsson died of a heart attack in November 2004 at the age of 50, before publication of "The Girl with the Dragon Tattoo," "The Girl Who Played with Fire" and "The Girl who Kicked the Hornet's Nest."

Gabrielsson, his partner for 32 years, has been locked in a dispute with Larsson's family over his inheritance. The journalist-turned-novelist died without a will, and the couple never had children.
In her memoir, titled "Millennium, Stieg and Me," Gabrielsson told readers that "I am fighting for him, for myself, for you."

Not unlike the trilogy's main characters -- crusading journalist Mikael Blomkvist and punk computer hacker Lisbeth Salander -- Larsson campaigned throughout his journalistic career against extremism and racism, with Gabrielsson, an architect, at his side.

On the much-talked-about fourth volume, Gabrielsson confirmed that Larsson, typing on a computer, wrote just over 200 pages of the story before his untimely death.
"I am able to finish it ... Stieg and I often wrote together," she said, adding that she would only do so once she got undisputed rights to his work from the Larsson family.

She added, "It is not my intention to recount here the plot of the fourth volume. On the other hand, I want to say that Lisbeth little by little frees herself from her ghosts and her enemies."

Read more: http://www.nypost.com/p/entertainment/no_fourth_millennium_book_says_stieg
Posted by Beattie's Book Blog at 7:56 am