Sarah Sands: Jamie can make the sun shine in half an hour 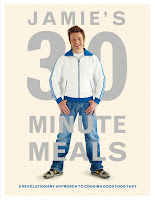 It is not easy flogging books to the public during a recession, and the excellent figures for Penguin last week were cheering. What lifted the fortunes of the publisher was the record-breaking success of Jamie Oliver's 30-Minute Meals. Why this book rather than learning to cook in 24 hours, or like an Italian?

Jamie has cracked the brilliant contradiction in the consumer psyche. We yearn for terroir – eating al fresco with friends and family, sensuous and relaxed. But we would also like the meal cooked and cleared at top speed, so we can reply to the day's emails and hit the pillow. We would love to shop at vibrant markets, tasting the tomatoes and cheeses before pedalling off with a baguette in the basket, but the reality is a sweaty commute and a dash to Tesco Metro.

How can one combine good life cooking with a work ethic? For the past decade, we have had slow cooking disintegrating down our throats. Nothing was worth eating if it had not been soaked overnight and simmered for five hours. Slow-cooking festivals attracted pilgrims at their own crawling pace. Even last year we swallowed the film of Eat Pray Love, lingering on an American's delighted conversion to an Italian credo of eating and "doing nothing". No wonder Julia Roberts, the film's star, looked embarrassed. Who, apart from the southern Mediterranean, buys laziness as a philosophy?

Time management is the grail of our age. It is not the same as cutting corners. That is why many of us were offended when Delia Smith (pic left) suggested we serve frozen mash and tinned mince. It was a wretched return to post war, monotone England; it was Elizabeth David denial.

Jamie Oliver puts "beautiful" and "quick" in the same, genius sentence, where before they were regarded as antithetical. But he sympathises with the Very Busy Readers, too modest to mention his own hydra-headed life, multiple businesses, and permanently pregnant wife. His realisation that cooking is an emotion as well as a skill owes much to Nigella. She has been using evocative words such as "summer", "home" and "comfort" for years. She, counterintuitively, launched herself as an Italian mamma at a time when professional women quoted Shirley Conran's bleak aphorism that life was too short to stuff a mushroom. 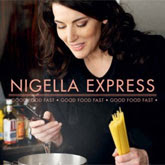 Nigella then tried to reposition herself with her Express book, which aimed to cut down time in the kitchen. She may have had the iron soul of a tiger mother by then, but she could not renounce her preposterously sensuous frame with commercial impunity, although the men in her life, her father and her husband, both embarked on diets. Nigella is probably as busy as Jamie, but her overwhelming appeal is unhurried. We all want to cook faster, but nobody yet had dared suggest Express sex.

What Jamie deduces in his latest book is that our hearts are Mediterranean, our heads Anglo-Saxon. It is why we will never resolve our relationship between Europe and the US.

The 30-minute recipe is not the same as having it all. You are not going to get lamb shanks in 30 minutes. What 30 minutes means, mostly, is pasta and salad. It is optimistic to manage a first course and a pudding in the time without a degree in neuroscience. But, sprinkling basil on tomato, I have a glimpse of terroir that heated-up meals can never offer. Jamie Oliver is doing what successful business people have always done. He is selling dreams.

Sarah Sands is deputy editor of the 'London Evening Standard'.
Posted by Beattie's Book Blog at 10:55 am