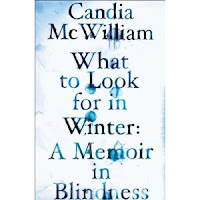 In this year’s South Bank Sky Arts Awards Candia McWilliam has walked away with the prize for Literature. She beat Barbara Trapido’s Sex and Stravinsky and, Costa Biography Winner, Edmund de Waal’s The Hare with the Amber Eyes, with her memoir What to Look for in Winter.

Edinburgh born Candia is the author of several novels prior to her non-fiction memoir. Most notably she wrote A Case of Knives which won a Betty Trask Prize and Debatable Land which was awarded the Guardian Fiction Prize and its Italian translation won the Premio Grinzane Cavour for the best foreign novel of the year.

In 2006, the year she was appointed one of the Booker Prize judges, she began to suffer from the effects of blepharospasm, a condition in which the muscles controlling her eye lids slowly began to close. Candia became blind as a result even though her eyes were perfectly healthy. In 2009 she underwent an operation which harvested tendons from her leg in order to enable her to open her eyelids. During this period of blindness Candia dictated her memoir What to Look for in Winter.

thebookshow.skyarts.co.uk
Posted by Beattie's Book Blog at 6:18 am