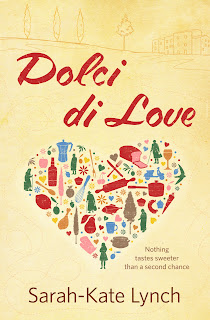 Take one Tuscan setting, one cheating husband, one childless, heartbroken wife, one Secret League of Widowed Darners, one handsome Italian, and some delicious biscotti and you have the recipe for internationally bestselling author Sarah-Kate Lynch’s delightful new novel Dolci di Love.

Some women dream of spending a summer in the warm seductive splendor of Tuscany, but Manhattan corporate star Lily Turner has never been one of them — until she discovers that Daniel, her perfect husband, has a secret family there.

Determined to confront the Italian temptress, Lily arrives in the hilltop town of Montevedova where her plight attracts the attention of The Secret League of Widowed Darners, an all-but-invisible army pulling strings behind the scenes to create happy endings.
Soon, ageing founding members Violetta and Luciana are scheming to mend Lily’s broken heart — and to enlist her help for their struggling pasticceria (pastry shop).
Then in blows troubled but lovable little Francesca, a breath of fresh air from the most unexpected direction.

With the lush rolling greenery of a sumptuous Tuscan summer in the background, and the tantalizing scent of fresh-baked biscotti —or cantucci as it’s known in Tuscany — in the air, Dolci di Love is as good as being there.

Sarah-Kate Lynch’s seventh novel, Dolci di Love, has already been sold into the United States, Australia, Poland, the Netherlands, Portugal and Brazil.
Her audience continues to build around the world and at home as readers savour her delightful concoctions of modern love, quirky life, and mouth-watering morsels.

The germ of the idea for Dolci di Love grew from a conversation about a real-life husband who turned out to have a secret family. Most men struggle with just one, so how, Sarah-Kate wondered, did anyone manage a second, hidden one? Then she met a woman who was part of such a secret, and some of her questions were answered.

To further research Dolci di Love, Sarah-Kate made two separate trips to the hilltop towns of Tuscany, where she attempted to learn Italian and found possibly the world’s most tantalizing pasticceria.

It was on one of these trips that Sarah-Kate discovered little old ladies clad in black who sat in separated doorways watching the world go by. She began to wonder: what if all these little old ladies were not so separate? What if they were in cahoots and up to something? Thus the Secret League of Widowed Darners was born …

Sarah-Kate will be conducting an author tour to the places below with event details to follow soon: