Two "glamour gals" of the NZ literary scene sparked off each other quite wonderfully in the second session I attended this morning. Looking more like rock chicks than authors they delighted the large audience in response to the thoughtful questions put to them by teacher/book reviewer/editor Dorothy Vinicombe
Ranging over their writing lives, where their ideas come from, their research, historical fiction, the difficulties, and advantages, of being published overseas, ghosts, Jane Austen, Charlotte Bronte, cemeteries, using actual historical events within fiction, and much more they proved to be entertaining, frank, informative and great fun.
Another excellent event. 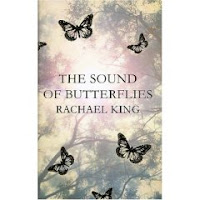 Rachael King's The Sound of Butterflies has now been published in eight languages including German, Dutch, Italian, Russian, Greek, and Chinese.

Paula Morris, whose latest work , a YA novel Ruined, has already sold over 150,000 copies in the US. It is the first of three titles in a series of Ruined Cities series to be published by Scholastic. Ruined is set in New Orleans, US the second will be set in York, UK and the third in Rome, Italy.