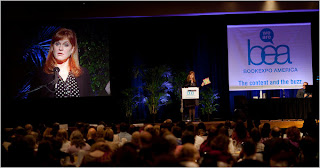 At Book Expo, Anxiety Amid the Chatter

As the book industry gathered for its annual convention in New York this week, it had plenty to be nervous about: the threat of piracy, the decline of brick-and-mortar stores and the perhaps-too-low price of e-books.

There was also the fact that the scandal-ridden Sarah Ferguson, the duchess of York, had been booked as the master of ceremonies for one of the convention’s most prominent events.

“Maybe I should take a leaf out of one of my own books,” the duchess said, speaking to a standing-room-only crowd on Wednesday morning, as she acknowledged the recent British tabloid report that she had accepted $40,000 in cash from a journalist posing as a businessman in exchange for setting up a meeting with her ex-husband, Prince Andrew. “One of the books is ‘Ashley Learns About Strangers.’ Or ‘Matthew and the Bullies.’ ”

Controversy or not, very little gets in the way of the retail politics of bookselling at BookExpo America, a yearly gathering of 30,000 publishers, booksellers, authors, librarians, agents and publicists. Authors and publishers were there in force to pitch their fall books, among them a no-holds-barred memoir by Keith Richards (“Life”), a historical novel by Ken Follett (“Fall of Giants”) and the latest John Grisham thriller (“The Confession”).

Tickets quickly sold out for a breakfast on Thursday morning hosted by Jon Stewart, whose latest tome, “Earth (The Book)” will be published in September. Eager conventiongoers lined up on the exhibition floor of the Jacob K. Javits Center for book signings by best-selling authors like Rick Riordan (“The Kane Chronicles”), or for free galleys stacked up in exhibit booths.

“They’re the most vociferous advocates for books,” said Jonathan Karp, the publisher and editor in chief of Twelve, as he handed a young woman a free copy of “God and Sex,” by Michael Coogan. “But you do worry that a lot of it is going to end up on eBay.”