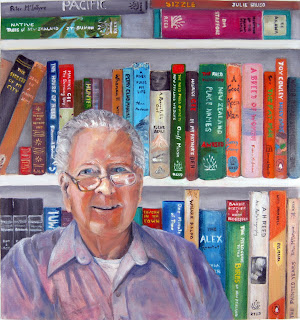 John Reed, son of the late AW Reed, is an old friend of mine. He lives in Australia and is still active in the book world. He and I communicate occasionally by e-mail, usually reminiscing about far off publishing days. Recently we were talking about Ray Richards, (portrait above by Barbara Richards),  former CEO of AH & AW Reed, former founding executive director of the publishers association in NZ, and now long-time literary agent. I thought that much of what John had to say about Ray would be of interest to others. John has kindly given me permission to quote from his e-mail to me. Here it is, in part.

I know Ray has been honoured in a number of ways, and deservedly so, but in spite of that I don’t think many really realises the huge contribution he’s made (to books and publishing) over many years, and which he is still doing.   As he says, “Age shall not weary them” – 89 years old and still an active literary agent.

Anyway, here is something of Ray’s story since all the events of the mid 70s and mid 80s!

Ray is the executor of both AH Reed and AW Reed, and in fact is NZ’s first and longest-serving literary agent.   Our family has every reason to be mighty grateful fo his indefatigable efforts   All of AH and AWs books were first published by Reeds, right back from the 30s, through the war years and up until 1983.   There were half a dozen people working for Reeds in those early days, but at its height in Australia and New Zealand there were 130-140 people employed, with offices in Auckland, Wellington, Christchurch, Sydney and Melbourne.
Ray confirms that the most recently published AH books were The Gum Diggers (Gordon Ell), The Four Corners of NZ and First Walks In NZ (both published by Reed Books).
My Dad wrote well in excess of 200 books (some pretty small ones among them of course, but also some quite major tomes)   Every one of course was published by Reeds in the first instance.  Some Maori titles continue with Penguin, carrying  the Raupo imprint. 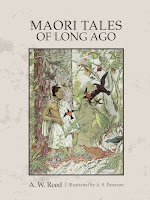 Reed Books rejected Ray’s proposal that they re-publish Myths and Legends of Maoriland, because they wanted to replace the Dennis Turner classic illustrations, so he offered it to New Holland who happily sell 2000 copies a year under the new title of Maori Myths and Legendary Tales (Maoriland being a taboo word these days!).

Similarly, An Illustrated Encyclopedia of Maori Life was rejected by Reed Books and published by New Holland.   They also picked up Maori Tales of Long Ago, this time because it was rejected by Penguin. It was published earlier this year, in a handsome facsimile edition.

Admittedly, to the credit of Penguin NZ they are re-issuing New Zealand Place Names later this year, another AW book that has been meticulously updated by Peter Dowling, former Reed Books Publisher.
So there it is Graham.   There are of course, lots more stories about Ray, that probably won’t see the light of day.   But I’ve had the privilege of knowing a lot of them.

All those Australian titles we published so successfully down through the years, most of which are relatively unsung because the focus has always been on his NZ successes.   And don’t ever take those away from him, Graham – they are legion.

Where would Barry Crump (left) have been without Ray, Graham Kerr, this list

is endless.   And I think I’d better add myself into that.   I was pretty green when I went to Australia in 1964, but Ray was right behind me the entire time I was there  before he left the company.
To vary the quote a little, “We will remember him”.
Posted by Beattie's Book Blog at 12:12 pm