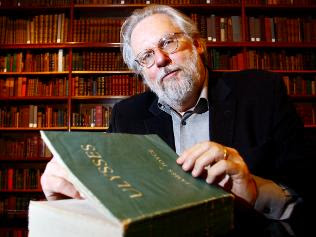 Rare book dealers to become rarer still
by Rosemary Sorensen, in The Australian
May 22, 2010

THOSE who love books as beautiful objects of cultural history should not be afraid of e-books but embrace the impending change to digital publishing as a good thing.

"There are already too many books," rare book dealer Rick Gekoski said yesterday at the Sydney Writers' Festival.
"If half of them die, that's good."

Mr Gekoski, an American who has a tiny bookshop in London, has bought and sold inscribed first editions of T.S. Eliot's The Waste Land, James Joyce's Ulysses and "everything by Graham Greene".
He spoke at the festival yesterday with Australia's pre-eminent rare book dealer, Nicholas Pounder, and both agreed the e-reader was an unpleasant way to read a book, but "very practical" for temporarily storing books you did not want to keep.

"It will become harder and harder for the big publishing companies to publish quality things for niche audiences," Mr Gekoski said. "But people are already hiving off and starting up small independent presses, which will start to create quality books for niche markets."
Mr Gekoski said it took Joyce 17 years to find a mainstream publisher, after the publication of his first book by a small press in 1907.

Those editions, which now sell for many thousands of dollars, were "just books", Mr Gekoski said. "Once a book is beautifully produced, it's almost a sign no one wants them. I'm interested in a big book, with a big cultural moment and a big narrative behind it."
Collectors of first editions of important books tended to be middle-aged men, Mr Gekoski said, and he was concerned that collectors would disappear.
"I am very concerned that 20-year-olds, who are used to e-books and reading on iPhones, do not have a communal reading life," he said.
Posted by Beattie's Book Blog at 11:38 am