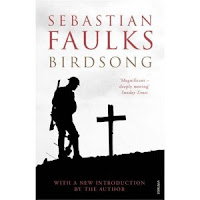 Birdsong, Sebastian Faulks’s best-selling First World War-set novel, is to be brought to the stage at London’s Comedy theatre this autumn.

The new stage adaptation by Rachel Wagstaff, directed by Sir Trevor Nunn, opens on 28 September, following previews from 18 September. Casting is yet to be announced.

Birdsong, which has sold more than two million copies in the UK alone, is the tale of one man’s journey through an all-consuming love affair and into the horror of the First World War.
Posted by Beattie's Book Blog at 7:03 am