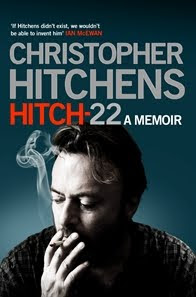 The confessional, acidic, candid, hilarious and ever-provocative memoir of the great contrarian, one of the most admired and controversial intellectuals of our time. And what a great interview with Kim Hill on Saturday Morning on Radio New Zealand National.
Listener Features Editor Joanne Black has also interviewed Hitch and there are four pages devoted to her piece in the New Zealand Listener out today.

Over the course of his 60 years, Christopher Hitchens has led a complicated and full life, and has developed a perspective like no other public intellectual today. A citizen of the US and the UK, he has been both a socialist opposed to the war in Vietnam and a supporter of the US war against Islamic extremism in Iraq. He has been both a foreign correspondent in some of the world’s most dangerous places and a legendary bon vivant with an unquenchable thirst for alcohol and literature. He is a fervent atheist, raised as a Christian, by a mother whose Jewish heritage was not revealed to him until her suicide. He sees all sides of an argument, and he believes the personal is political. His originality, bravery, range and wit made him first a leading iconoclast of the political left and now a formidable advocate of secular liberalism.

In this long-awaited and candid memoir, Hitchens re-traces the footsteps of his life to date, from his childhood in Portsmouth with his adoring, tragic mother and reserved Naval officer father; to his years as a radical socialist at Balliol College, Oxford; to his life in Washington DC, the base from which he has launched fierce attacks on tyranny of all kinds. Along the way, he recalls the girls, boys and booze; the friendships and the feuds (with people such as Gore Vidal, Martin Amis, Ian McEwan, Tariq Ali, Salman Rushdie and Edward Said); the grand struggles and lost causes; and the mistakes and misgivings that have characterised his life.

ABOUT THE AUTHOR
Christopher Hitchens is a widely published polemicist and frequent radio and TV commentator. He is a contributing editor to Vanity Fair and a visiting professor of liberal studies at the New School. He is the author of numerous books, including works on Thomas Jefferson, Thomas Paine, George Orwell, Mother Teresa, Bill and Hillary Clinton, Henry Kissinger, and the New York Times bestseller God Is Not Great.