THE GIRL WHO KICKED THE HORNET’S NEST
By Stieg Larsson
Translated by Reg Keeland. 563 pp. Alfred A. Knopf. US$27.95
Reviewed by David Kamp
Published New York Times, May 20, 2010 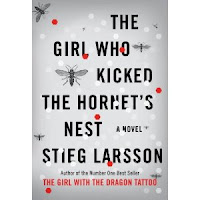 If you’re a latecomer to the Stieg Larsson phenomenon, here, briefly, is the deal: Larsson was a Swedish journalist who edited a magazine called Expo, which was devoted to exposing racist and extremist organizations in his nativeland. In his spare time, he worked on a trilogy of crime thrillers, delivering them to his Swedish publisher in 2004. In November of that year, a few months before the first of these novels came out, he died of a heart attack. He was only 50, and he never got to see his books become enormous best sellers — first in Sweden and then, in translation, all over the globe.

“The Girl Who Kicked the Hornet’s Nest” is the third installment of the ­trilogy; its predecessors, “The Girl With the Dragon Tattoo” and “The Girl Who Played With Fire,” have already sold a million copies combined in the United States and many times that abroad. All three books are centered on two ­principal characters: a fearless middle-aged journalist named Mikael Blomkvist, who publishes an Expo-like magazine called Millennium, and a slight, sullen, socially maladjusted, tech-savvy young goth named Lisbeth Salander, the “girl” of the books’ titles, who, in addition to her dragon tattoo, possesses extraordinary hacking abilities and a twisted, complicated past. Together, Blomkvist and Salander use their wiles and skills to take on corporate corruptos, government sleazes and sex criminals, not to mention these miscreants’ attendant hired goons.

This all might sound rather Euro-cheesy, a bit Jean-Claude Van Damme, but it’s not. Larsson was a cerebral, high-minded activist and self-proclaimed feminist who happened to have a God-given gift for pulse-racing narrative. It’s this offbeat combination of attributes — imagine if John Grisham had prefaced his writing career not by practicing law in Mississippi but by heading up the Stockholm office of Amnesty International — that has made the series such a sui generis smash.

Larsson’s is a dark, nearly humorless world, where everyone works fervidly into the night and swills tons of coffee; hardly a page goes by without someone “switching on the coffee machine,” ordering “coffee and a sandwich” or responding affirmatively to the offer “Coffee?” But this world is not dystopian. The good guys (or, I should say, the morally righteous people of all genders) always prevail in the end. The books, translated by Reg Keeland, are not lightweight in any sense — their combined bulk, at upward of 500 pages apiece, will strain the biceps of even the most Bunyan­esque U.P.S. delivery­man — but they’re extra­ordinarily fleet of movement and utterly addicting.
Full review at NYT.
Posted by Beattie's Book Blog at 7:51 am