He was crowned New Zealand's first MasterChef - and went back to teaching. But Brett McGregor has left the classroom, at least for a while.The dedicated deputy principal of Christchurch's Branston Intermediate has taken a leave of absence while he completes his first cookbook.
This week at school is his last for a month. During that period he will test new recipes on his wife and son, before heading to Auckland to kickstart the book's production.
The book deal was part of his prize package after he beat Aucklander Kelly Young in the final.

Although McGregor emphasises he is not planning to leave his teaching job permanently, he can't deny the top-rating TVOne show has given him a taste for more of the culinary world. "I'm trying to do as many things as I can.
"A couple of opportunities have come up, but they're not that real or concrete yet.
"I went into it wanting a TV show and nothing has changed so far."

McGregor says his cookbook will feature dishes from Spain, Morocco and Asia and show "how travelling can influence your culinary world at home".

Between cooking at home and working on his book, he will visit top Christchurch chef Johnny Schwass for cooking lessons.
Full story at HOS.

Footnote:
Brett's  cookbook will be published by Random House NZ; likely pub date, April 2011. The Bookman is most interested in this project and will keep you posted as news becomes available, title/definite pub date etc.
Brett and runner up Masterchef NZ Kelly Young were recently st the Wellington Food Show where top food writer Lauraine Jacobs hosted them on stage at their first live demonstration together.
Pic below shows the three of them at the Wellington Food Show and yuouy can read more abpout this event on Lauraine's own excellent website. 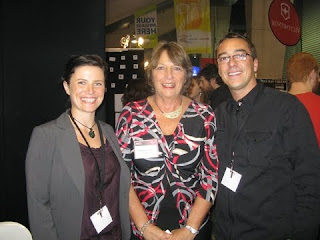