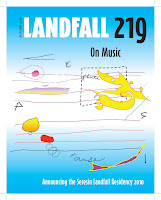 Celebrate the close of New Zealand Music Month with Landfall 219.
The editor, musician and writer Bill Direen, is well placed to look at music and music-making in our culture and has produced a great mix of work.

New Zealand music has been made with electric guitars, European orchestral instruments, laptops, bones, voices, skin, wood, pvc piping, air, magnetic tape and digital media. Our musicians and composers
are many and varied, whether within these shores or travelling the world.

David Eggleton has a poem about the ‘Barnes Dance’ of the traffi c lights, Helen Lehndorf writes about ‘Taranaki Hardcore’, Stuart Page contributes band photos from the ’70s and Marcel Tromp photos of music-making and music-makers in the upper North Island, Keri Hulme refl ects on music in poetry, George D. Henderson looks back at drugs in the music scene, William Dart writes about composers Lilburn and Harris, and Kiran Dass examines ‘The main problem with music writing in New Zealand ...’

Landfall 219 also announces the winner of the Seresin Landfall Residency 2010. Accompanying
the announcement is the diary by C.K. Stead of his time in Tuscany as the 2009 resident. A lot of people are waiting for this issue, which is published today, 24 May.

About the Editor
Bill Direen grew up in the sixties surrounded by music and poetry of all sorts, classical, cultural, liturgical, radio pop and rock.
He studied electronic music under Douglas Lilburn before concentrating on literature (M.A. Hons, Canterbury University) and developing an independent career as writer and musician.