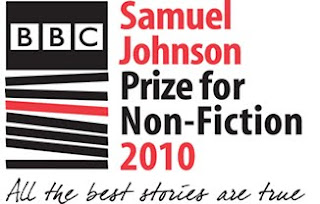 The judges for the 2010 BBC Samuel Johnson Prize announced the shortlist today, Wednesday, 26 May. Now in its 12th year the Prize is worth £20,000 to the winning author.

The list includes an accessible and entertaining guide to the world of mathematics; an eye-opening account of everyday life in North Korea; an angling memoir interwoven with stories of friendship and war; a behind-the-scenes account of the greatest financial crisis since the Great Depression; a biography of Charles II and a compelling argument that it was learning to cook with fire that made us human.

Too Big to Fail is Andrew Ross Sorkin’s first book and is already an international bestseller. The 32 year old has written for The New York Times since 1995 and by the time he graduated had written 71 articles for the paper.

A Gambling Man by Jenny Uglow is William Hill’s 3/1 favourite. See below for all the shortlist odds.

Evan Davis, chair of the judges, economist, and presenter of Radio 4 Today, comments: “We did have a number of arguments in our deliberations, but we've settled on an extraordinarily eclectic selection of books which defies simplistic categorisation. There is something for everyone, whether it be maths or fishing. Perhaps the only common feature of these books is the passion and sheer enthusiasm of the authors for their subjects.”

Davis is joined on the judging panel by writer and arts editor of the Financial Times, Jan Dalley; executive editor of The Times, Daniel Finkelstein; editor of New Scientist, Roger Highfield; and author and best-selling historian Stella Tillyard.

The judges will announce the winner of the Prize at an awards event on 1 July at the Royal Institute for British Architects (RIBA). The winner receives £20,000, and each of the five shortlisted authors, £1,000.

Formerly the BBC FOUR Samuel Johnson Prize, the change in name reflects the BBC’s commitment to broadcasting coverage of the prize on BBC TWO’s The Culture Show.

Graham Sharpe at William Hill comments, ‘As ever the BBC Samuel Johnson shortlist is packed with quality, and every runner would be a worthy winner, which makes it all the more difficult for us to try to second guess the judging panel. It looks the most open year for some while and should produce a lively betting market.’

In this entertaining and accessible book, Alex Bellos explodes the myth that maths is best left to the geeks. Covering subjects from adding to algebra, from set theory to statistics, and from logarithms to logical paradoxes, he explains how mathematical ideas underpin just about everything in our lives. Bellos explains the surprising geometry of the 50p piece, and the strategy of how best to gamble it in a casino. He shines a light on the mathematical patterns in nature, and on the peculiar predictability of random behaviour. He eats a potato crisp whose revolutionary shape was unpalatable to the ancient Greeks, and he shows the deep connections between maths, religion and philosophy. An unlikely but exhilarating cocktail of history, reportage and mathematical proofs, Alex's dispatches from ‘Numberland’ show the world of maths to be a much friendlier and more colourful place than you might have imagined.

Alex Bellos has a degree in Mathematics and Philosophy from Oxford University. He has worked for the Guardian in London and Rio de Janeiro, where he was the paper’s unusually numerate foreign correspondent. In 2002 he wrote a critically acclaimed book about Brazilian football and in 2006 ghost wrote Pelé’s autobiography, which was a number one bestseller.

Nothing to Envy: Real Lives in North Korea by Barbara Demick (Granta)

Nothing to Envy weaves together the stories of adversity and resilience of six residents of Chongin, North Korea's third largest city. Two lovers, who dated secretly for a decade, feared to criticise the regime to each other. A loyal factory worker watched her husband and son die of starvation before escaping the country. In telling the stories of Chongin's residents, Demick has recreated the concerns, cultures of North Korean citizens from their interests and concerns to their culture.

Barbara Demick is a foreign correspondent for the Los Angeles Times, based in Beijing.  Her coverage of the war in Sarajevo won the George Polk Award and the Robert F. Kennedy Award, and she was a finalist for the Pulitzer Prize in international reporting.

As a child in the 1960s, Luke Jennings was fascinated by the rivers and lakes around his Sussex home. With library books as his guide, he applied himself to the task of learning to fish. So began an enlightening but often dark-shadowed journey of discovery. Blood Knots is about angling, but it is also about friendship, honour and coming of age. As an adult, Jennings has sought out lost and secretive waterways, probing waters ‘as deep as England’ at dead of night in search of giant pike. The quest, as always, is for more than the living quarry. For only by searching far beneath the surface, Jennings suggests in this most moving and thought-provoking of memoirs, can you connect with your own deep history.

Luke Jennings is the author of three novels, including the Man Booker Prize-nominated Atlantic. As a journalist he has written for Vanity Fair, The New Yorker and Time, as well as all the British broadsheets, and is currently the dance critic of the Observer. He lives in North London with his wife and three children, lives in North London. 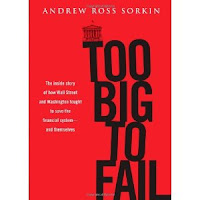 Andrew Ross Sorkin delivers a behind-the-scenes, moment-by-moment, account of how the greatest financial crisis since the Great Depression developed into a global tsunami. From inside the corner office at Lehman Brothers to secret meetings in South Korea, Russia and the corridors of Washington, Too Big to Fail is the definitive story of the most powerful men and women in finance and politics grappling with success and failure, ego, greed, and, ultimately, the fate of the world's economy. Through unprecedented access to the players involved, Too Big to Fail recreates all the drama and turmoil, revealing never-disclosed details and elucidating how decisions made on Wall Street over the past decade sowed the seeds of the debacle.

Andrew Ross Sorkin is the award-winning chief mergers and acquisitions reporter for the New York Times, a columnist, and assistant editor of business and finance news. Sorkin began writing for The New York Times in 1995 under unusual circumstances: he hadn’t yet graduated from high school. By the time he graduated from college he had 71 articles published in the paper. Sorkin has won a Gerald Loeb Award for business journalism, and a Society of American Business Editors and Writers Award. In 2007, the World Economic Forum named him a Young Global Leader and the following year Vanity Fair named him as one of 40 new members of the ‘Next Establishment’.


A Gambling Man by Jenny Uglow (Faber and Faber)

Charles II was thirty when he crossed the Channel in May, 1660. His Restoration was greeted with maypoles and bonfires, like spring after long years of Cromwell’s rule. But there was no going back, no way he could ‘restore’ the old and so began a decade of experiment, from the rise of science and credit to the shocking licence of the Court and the failed attempts at toleration of different beliefs.  A Gambling Man is a portrait of Charles II, exploring his elusive nature through the lens of these ten vital years – and a portrait of a vibrant, violent, pulsing world, in which the risks the king took forged the fate of the nation, on the brink of the modern world.

Jenny Uglow grew up in Cumbria and now works in publishing. Her books include prize-winning biographies of Elizabeth Gaskell and William Hogarth. The Lunar Men, published in 2002, was described by Richard Holmes as ‘an extraordinarily gripping account’, while her most recent biography, Nature’s Engraver: A Life of Thomas Bewick, won the National Arts Writers Award for 2007. She lives in Canterbury.


Catching Fire: How Cooking made us Human by Richard Wrangham (Profile Books)

Catching Fire offers a startlingly original argument about how we came to be the social, intelligent, and sexual species we are today. Richard Wrangham argues that it was cooking that caused the extraordinary transformation of our ancestors from apelike beings to Homo erectus. At the heart of Catching Fire lies the groundbreaking new theory that the habit of eating cooked rather than raw food made us human. More than language, emotional intelligence, or the opposable thumb, the mastery of fire created us. Once our ancestors began cooking their food, the human digestive tract began to shrink and the brain to grow. Time once spent chewing tough raw food could be used instead to hunt and to tend camp. Cooking became the basis for pair bonding and marriage, created the household and even led to a sexual division of labour.

Richard Wrangham is a British primatologist. He is the Ruth Moore Professor of Biological Anthropology at Harvard University and Curator of Primate Behavioural Biology at the Peabody Museum. He is the co-author of Demonic Males and co-editor of Chimpanzee Cultures. He lives in Cambridge, Massachusetts.