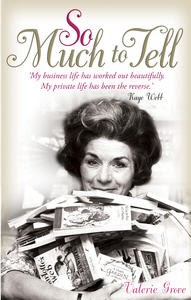 So Much to Tell
Valerie Grove,
Viking

Just published in the UK and to be released in NZ in August this is the long-awaited biography of the late noted and mercurial children's book publisher, Kaye Webb.
Kaye was a friend and colleague of mine, (her last years at Penguin coincided with my joining the company),I admired her enormously,she greatly influenced my publishing life, and I can't wait to read Grove's biography.
Meantime the first review has appeared in the UK press, in the Financial Times. Here is an excerpt:


Look inside a Puffin children’s paperback book from the 1960s and 1970s and it will bear the legend “Editor, Kaye Webb”. Like any bookish child of the era, I often saw the name, and wondered who this famous Kaye Webb might be. We’ve had to wait until adulthood to find out the full answer but, as Valerie Grove’s wonderful biography – published on Puffin’s 70th anniversary – reveals, Webb had a life story just as compelling as any of the novels she loved (she read 20 children’s books a week, usually in bed).

From 1961-1979, Webb oversaw a golden age of children’s publishing at Penguin’s Puffin imprint. She developed an existing brand into something that parents and children came to rely on and was responsible for bringing Ursula Le Guin, Rosemary Sutcliff, Joan Aiken and many others to a huge audience. Webb “liked stories with pace and a strong moral sense, without being prim,” Grove recounts.

Grove’s lively book is a must-read for those of us whose childhood was shaped by Webb’s Puffin books. But even if you don’t know and love Puffins, it offers a seductive recreation of a now almost-lost world of wartime and 1950s London.

Above all, Webb was a force in children’s publishing whose legacy goes far beyond an ageing middle-class fan base. Many of the books she championed are still in print – ready to delight our children and grandchildren.


Read the full review at FT.
Posted by Beattie's Book Blog at 6:38 am