Bill Bryson - Local stories for global people
Bill Bryson has caught the spirit of our stay-at-home times with a grand tour of his own house.
Boyd Tonkin surveys his domestic epic and finds trouble brewing in the literary neighbourhood
in The Independent 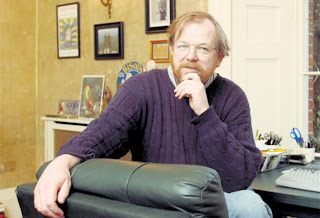 About the house and around the world: Bill Bryson

The Icelandic volcano may lie almost dormant, but airline strikes persist. Add to these disincentives a national mood of austerity and a growing reluctance on green principles to travel far or often. Every factor falls into place for a revived willingness to cultivate and celebrate our own backyards. Travel literature, once so eager to scour the planet for obscurely exotic nooks, now embraces a stay-at-home culture we might dub the New Local. Prophetically, Alain de Botton last year published his drolly enlightening essay about terminal existence inside Heathrow, A Week at the Airport.

At this week's Ondaatje Prize award for the best book on the "literature of place", at least three shortlisted titles backed up a trend towards travel – or anti-travel - writing that digs down into familiar soil: Madeleine Bunting's The Plot, about her father's beloved acre of Yorkshire, William Fiennes's The Music Room, which evokes a (somewhat grand) house and the family life that unfolded within it, and Iain Sinclair's deliriously erudite tour of his east London manor, Hackney, That Rose-Red Empire. If the prize did eventually go to Ian Thomson's anti-romantic Jamaican travelogue, The Dead Yard, bear in mind that it focuses on reverse-migrants who returned to the island from Britain. This, too, is a book about home and what it means.

At the Ondaatje ceremony, Adam Nicolson – who won last year for his sumptuous exploration of his own fabled family plot, Sissinghurst – spoke of the value of writing that aims to tell the story of "everything that has ever happened" on one spot. Bill Bryson's "home" may be less splendid than Sissinghurst. Still, it acts as the focus for a wide-angled tour of domesticity in Britain which proves that the whole wide world may impinge on our everyday routine. His new book, At Home: a short history of private life (Doubleday, £20), delivers a great whiffy chunk of the New Local, a load of homespun history as compelling – and sometimes alarming - as the arrival of a truckload of farmhouse cheese or organic compost. If in the "literature of place", staying put is the new going out, here is its Tristram Shandy or its Moby-Dick – a book appearing in the very year, 1851, that saw Bryson's Norfolk parsonage rise amid the quiet fields to accommodate a well-to-do young bachelor clergyman, Thomas Marsham.

Bryson's much-loved travel books have led satisfied readers on genial rides around Australia and Appalachia. Remember, though, that his career-defining works excelled at the now-standard New Local manoeuvre of an angled, offbeat route down humdrum or well-trodden paths: his adopted Britain in Notes from a Small Island, or the small-town America of The Lost Continent. 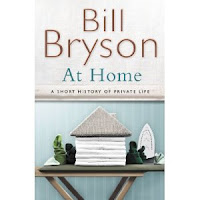 In At Home, Bryson strolls from room in room through his own ample rectory. From scullery to attic, with excursions into the fuse-box, down the garden and up the stairs, as well as stays in bedroom, bathroom and kitchen, he shows at digressive length how a 19th-century English middle-class house can in its layout and amenities enshrine a global past. Bryson views his home, any home, as the place where "history ends up".


Boyd Tonkin's full piece at The Independent.
Posted by Beattie's Book Blog at 6:14 am