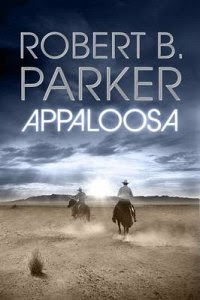 I reviewed this title on Radio NZ National this morning.


Robert B Parker died in January of this year aged 77, died in fact at his desk working on his latest novel. He is world-renowned of course as one of the truly great crime fiction writers with some 37 of his 60 odd novels featuring Spenser the former Boston detective fired for insubordination who has become one of the most popular private eyes in the entire genre of crime fiction. We never learn his first name and he always introduces himself as Spenser.
In addition to these Spenser novels Parker more recently introduced two new characters, Jesse Stone and Sunny Randall and had he lived we may have had many more in these two more recent series.
And of course he has now written a Western, Appaloosa Apparently this is the first of a trilogy so even though the author has departed we can look forward to two more novels. And I wouldn’t be surprised if there weren’t other novels in the pipeline. He was a prolific writer who could apparently knock out 10+ pages a day.

Appaloosa is a story set in New Mexico territory in 1882 and features Virgil Cole, a freelance lawman and his longtime deputy and friend Everitt Hitch who is the book’s narrator. When the two lawmen arrive in the small, dusty frontier town of Appaloosa they find it is controlled by the crooked and wealthy rancher Randall Bragg, a bully boy who has a band of nasty gun hands to protect him. Bragg and his cronies help themselves to what they want in the town – supplies, liquor, horses and women. Bragg has gunned down the town’s  previous marshall and one of his deputies. So Virgil Cole and Everitt Hitch are hired to clean up the town. Their presence and incedible ability with guns is quickly established and before long they attract the attention of Bragg.
Ultimately Bragg is arrested, tried & convicted for murder but then escapes with assistance from a couple of hired guns, the sharp-shooting Shelton twins. The story of the chase through Indian territory is wonderfully written, full of suspense and surprise – this is real high noon stuff and Parker does it well with his no-frills prose and superb characterisation.

I should have said that early on in the story Cole falls for a piano-playing beauty, Allison French, a new arrival in Appaloosa, a rather malevolent, manipulative character and she ends up playing a major part in the story.
Someone called Appaloosa a classic Western with a twist, and that is a fair description.

I suppose when you are as successful as Robert B Parker then you can write whatever you fancy but if he were still alive I would have urged him to stick to his crime thrillers. He was a recognised master of that genre having won a raft of Edgar Awards from the Mystery Writers of America and a Grand Master Edgar in 2002 for lifetime achievement in the field. Don’t misunderstand me,  Appaloosa is a very good read but give me one of his Spenser novels anytime!
Posted by Beattie's Book Blog at 12:17 pm