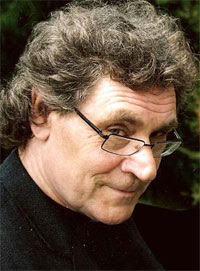 I don't like funerals but occasionally on the death of a friend, family member or colleague one has to be there. So yesterday I turned up at St.Patrick's Cathedral in the city to attend the funeral of Paul Reynolds, an old friend and recent mentor who had died suddenly aged 60 last Sunday. I got there 40 minutes before the service was due to start, I  wanted to spend some quiet time thinking about Paul and all that he had achieved, particularly in recent years when he became a pioneer with almost guru status in the digital world and its impact on books and book publishing. He became an authority on websites and blogs, particularly, but not only, in the library world. When I arrived there were already a dozen or so people at St.Pat's sitting quietly and by the time the service started the large church was filled to overflowing.

Following the karanga,(Maori chant of welcome), there was a welcome from the priest, a hymn was sung by the gathering, and then Merlena DeVoe sang a solo version of Schubert;s Ave Maria. This was followed  by Kieren Cooney's most moving eulogy, (I will try and get a copy of this),  before Paul's daughter Melanie, out from the UK for the funeral, read a Scottish poem which brought tears to most eyes, (again I will try and get a copy of this); there were prayers before Merlena DeVoe sang another solo, this time Pie Jesu by A.L.Webber.
A photgraphic montage of Paul's life followed, starting with him as a baby to a shot of Paul & Helen that may have been taken at last week's AWRF, projected on a large screen as Bob Dylan's Knock knock Knockin on heaven's door played. Not a lot of dry eyes after that.
Then followed the Catholic Church's Rite of Commendation, the priest's beautiful solo waiata and then we all filed out behind Paul's coffin. An hour had passed.
As Sibun's big shiny black hearse pulled away from the cathedral a lone Maori kuia's voice rang out in lament. I wept again.
Farewell Paul; a good man has left us.


Footnote:
Among the very large gathering for Paul's funeral I recognised many people from various communities - library, digital media, television, radio and newspaper, book publishing and bookselling. What an impact Paul made on all who knew him.
Read my earlier report on Paul's death here, and be sure to read the many tributes to Paul that follow it.

And this from author/friend Chad Taylor in London.

On behalf of the LIANZA Council, regional committees ,staff and members we support all thoughts in this time of sorrow, Paul was a great supporter and advocate for libraries and his contribution to our profession has always been thought provoking. He will be sorely missed. Our sincere condolences to Helen and family. So journey on Paul to the house of your ancestors where your blood tunes are being summoned to the resting place of your clan.
Ma te atua e manaaki e tiaki i nga wa katoa.
Posted by Beattie's Book Blog at 9:55 am