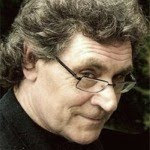 An early morning text today told me that my great friend and mentor, electonic media pioneer and authority, Paul Reynolds died suddenly yesterday. At first I was stunned and disbelieving, now I am greatly saddened and grieving. I was talking to him only last week at the AWRF of which he and business/life partner Helen were sponsors. I chided him about sitting with the VIP's! But in fact that is exactly what he was. A V.I.P.

When I first met Paul he was a part-time bookseller,(with Murray Gray at the former Under Silkwood Bookshop in Parnell), and book reviewer. He was also the first person I ever heard speak of the Web and the Internet and not long after that he appeared as a regular guest with Kim Hill during her Nine to Noon days talking about these subjects that most of us had hardly heard of let alone have any understanding of them. Way back then before e-mail had been invented and this whole area was the  exclusive domain of academics Paul could see the potential for it to transform our every day lives. He was New Zealand's first lay convert and susequent missionary for what we know and experience now as an integral part of our everyday lives.
He encouraged me in the first place to becomer a blogger and subsequently he taught me everything I know about blogging. I was/am pretty much computer-illiterate and I recall his great patience with me as he taught me the ins and outs of the cyber world I was entering. For quite a while I would make a monthly visit to McGovern Online's offices in Auckland for another lesson on the gentle art of blogging.These visits gradually became less and less frequent but my  e-mail queries continued with the last one being only 10 days ago.

Paul was an enormous supporter of public libraries and literary festivals and created many of their websites. He was a kind and generous friend whom I shall miss enormously. New Zealand has been robbed of a man who gave much and still had much to offer. What a bloody tragedy.
And Helen, to you, my love and deepest sympathy.My thoughts are with you at this very sad time.

Paul Reynolds: A Contribution | May 24, 2010 10:09
Paul Reynolds, internet developer, commentator and catalyst, died suddenly yesterday morning. He would have understood and approved of the way the sad news spread – via Twitter, Facebook and old-fashioned email.
His friend Bill Ralston made the announcement thus on Facebook:

In the spirit with which he lived and pioneered I have to announce this to all his friends online. Dear Paul Reynolds - the magnificent man who told us so much about the whole cosmos of computers and the wonders of the digital world - died this morning of a leukaemia he (and we) never knew he had. Our thoughts are with Helen and his much loved daughter Melanie

Like everyone else, I was dumbfounded. I last saw him exactly a week ago, at Social Media Junction, where he had, as ever, expressed his vision for what our new tools could do.

It is with shock and real sadness that we heard of Paul’s death on Sunday.  A bright light has gone from our lives and the library world has lost a dear and valued friend.   Paul played a significant part in shaping the digital world for libraries in many ways.  As a co-director of McGovern Online he influenced many of the online library services; as a commentator and journalist he pushed for libraries in the digital space.
He served as a commissioner for the LIAC (Library and Information Advisory Commission) during its formative years and until recently was the National Library’s Adjunct Director of the National Digital Library.  Paul was passionate about the role that libraries could play in enabling people to participate in the digital space and his most recent engagement was last Friday 14th when he took part in a strategy session for the Aotearoa People’s Network Kaharoa as a member of its Governance Group.

We will miss you Paul as will so many.  Our thoughts are with Helen and his family as they mourn their beloved Paul.
Aroha

Paul Reynolds was one of the most well known and respected commentators and thinkers on the topics of information access and technological change in New Zealand.
Paul spent many years enlightening listeners of Radio New Zealand to the wonders and potential of technology, and never failed to make the most complex things sound simple.
He was involved in a huge range of organisations and initiatives, designed to make New Zealand a more informed society. He was a member of the National Digital Forum, an adjunct director (digital library) to the National Library of New Zealand and a member of the former Government’s Digital Strategy Advisory group. Paul also served previously on the board of the Auckland War Memorial Museum and as a Library and Information Advisory Commissioner.
His sudden death on Sunday 23 May 2010 came as a shock to everyone who knew him, and has robbed New Zealand of one of its most innovative and visionary thinkers, and is an inconsolable loss for his family and friends.

Posted by David Farrar, InternetNZ member
Posted by Beattie's Book Blog at 9:05 am