Back to the Future: BEA Adds Back Third Day
From PublishersLunch

You have to love the book business in all its idiosyncrasy. For years exhibitors complained about the third day of the show, and we have archived pictures of last year's vast, empty aisles on Sunday. But nothing makes you miss something like taking it away.

Writing that "while people like the two-day format, a lot of people genuinely need three days to meet their objectives at BEA," show director Steve Rosato said they will add back a third day of exhibits next year. They will retain the mid-week schedule, and are likely to still have the conference day precede the three days of floor exhibition. We wish them well their decision--and hope their customers will be happy once they get what they wished for. Yesterday was packed--probably too packed--but today is already discernibly more moderate (except, perhaps, in the standing-in-line for an autograph).
Rosato post

Jon Stewart, whose new book Earth comes out from Grand Central in September, told the Adult Book Breakfast audience at BEA that when he read in the New York Times that the book industry was dead, he thought, "Oh, good, I don't have to get up early tomorrow."
Stewart kept the crowd laughing as he introduced fellow authors John Grisham, Condoleezza Rice, and Mary Roach.

Welcoming Rice to the podium, he said, "I'm not familiar with her work, but I hear good things."

Rice promised the audience that she would write the book of her eight years in the White House, but said first she was moved to tell the story of "how the little girl in pigtails with the missing front teeth from Birmingham, Alabama became secretary of state." Her memoir of her family and early life, Extraordinary, Ordinary People, will be published by Crown in October.
After listening to Rice's tales of her grandfather becoming a Presbyterian minister in order to get a college scholarship and her father claiming to be a Republican so he would be allowed to vote, Stewart quipped, "Don't make me like you." 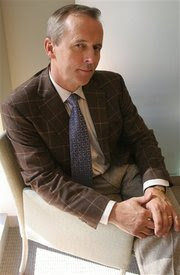 Grisham's new book, The Confession, which will be published by Doubleday in October, was inspired by his 2006 work The Innocent Man. The Innocent Man told the story of a wrongfully-convicted prisoner, based on an obituary Grisham read in the New York Times. The headline read, "Ronald Williamson, 51, Freed from Death Row, Dies."
"I spend a lot of time trying to hook the reader in the first paragraph, even in the first sentence, and I know a good hook when I see one," Grisham told the audience.
What Grisham didn't anticipate was how immersed he would become in the world of wrongful convictions. Even after The Innocent Man was published, "I couldn't shake the story," he said, eventually joining the board of The Innocence Project and traveling the country raising funds for that cause.
He began to imagine what might go on in the mind of the real killer watching as an innocent person is arrested, convicted, imprisoned, and that became the focus of The Confession.

Publisher's Lunch got a shout-out from the stage after Stewart pretended not to know author Mary Roach's name.
"When my publicist told me I was going to be on this panel, she sent me a Publishers Lunch snippet that read, 'Booksellers Breakfast to Feature Grisham, Rice, Stewart, and More,' Roach said. 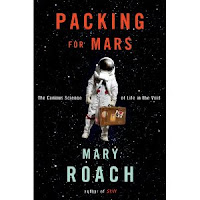 Roach also joked that the head of sales at Norton asked her to appear onstage at the breakfast wearing an astronaut's diaper -- "in front of Jon Stewart and more" --  to trumpet her forthcoming book, Packing for Mars, which looks at the human side of space travel. Roach's previous hits combining humor and science include Stiff, a look at death, and Bonk, about sex. -- Pamela Redmon Satran
Posted by Beattie's Book Blog at 6:57 am