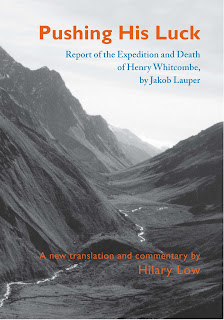 The dramatic account of a 19th century expedition across New Zealand’s Southern Alps has, for the first time, been accurately translated into English.

Pushing His Luck: Report of the Expedition and Death of Henry Whitcombe, by Jakob Lauper, published by Canterbury University Press, is the work of Wellingtonian Hilary Low and features her translation of a report, written in German, of an official but ill-fated 1863 expedition to search for a mountain pass suitable for a new route through the South Island’s Southern Alps.

The report was written by Swiss goldminer Jakob Lauper who was hired to accompany the expedition leader, Canterbury's road surveyor Henry Whitcombe. The expedition was prompted by local political and business leaders keen to link Christchurch directly with the West Coast, knowing that a gold rush was imminent.

Ms Low said once in the mountains, near the source of the Rakaia River, Whitcombe found a pass (later named after him) and, against instructions, decided to cross it to the West Coast. The journey turned to disaster. Dogged by bad weather and half-starved, Whitcombe and Lauper struggled through rugged uncharted country to the Coast where Whitcombe drowned trying to cross the swollen Taramakau River.

Lauper survived the ordeal and, on his return to Christchurch, wrote a report for the provincial government on the expedition and Whitcombe's death. It was quickly translated into English and published for the first time in July 1863.

Ms Low said this 1863 translation has been the only one available to subsequent writers in their retelling of the expedition’s story, most recently in the book Over the Whitcombe Pass (1960), edited by John Pascoe. However, prompted by a footnote in Pascoe’s book, she found that the original translation was riddled with errors and omissions, some significant.

“As he edited the report for publication Pascoe had trouble plotting Whitcombe’s route into the Alps, territory he knew well. Pascoe was forced to admit he could make no sense of Lauper’s description of the journey and commented in a footnote ‘This entry is puzzling’”.

This discovery spurred Ms Low to re-translate Lauper’s original hand-written manuscript and, as a result, she said Pushing His Luck provides a more accurate English translation of his account and more faithfully reflects the flavour of his writing.

“Pushing His Luck also offers Lauper’s report in a broader and more thoroughly researched historical setting; it presents biographies of both Whitcombe and Lauper for the first time, and explains how two great men of literature, Samuel Butler and Jules Verne, are associated with this story.”

Pushing His Luck was launched in the Canterbury Provincial Council Building in Christchurch yesterday, 30 May.

Pushing His Luck: Report of the Expedition and Death of Henry Whitcombe, by Jakob Lauper, a new translation and commentary by Hilary Low, published by Canterbury University Press, May 2010, RRP$40, paperback, 144pp, ISBN 978-1-877257-88-9
Posted by Beattie's Book Blog at 2:39 pm