The writer Henry Roth was a tortured, hard-luck case who at the end life enjoyed an unexpected redemption. Blocked for decades, full of doubt and self-loathing, he began writing again in his late 80s, even though crippled by rheumatoid arthritis, and finished four new novels, two of which he lived to see into print before his death in 1995. Now, almost miraculously, there is a fifth, “An American Type,” which W. W. Norton will publish on June 7. 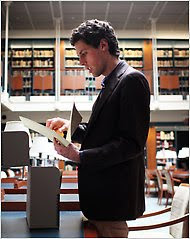 That the book exists at all is largely due to the efforts of Willing Davidson, a 32-year-old fiction editor at The New Yorker, who in background and bearing couldn’t be less like the prickly, self-doubting Roth, but nevertheless felt a deep connection to his life and work.

“An American Type,” like everything Roth wrote, is autobiographical, and describes a trip he made to the West Coast and back in 1938, hitchhiking and riding on freight trains for part of the way. It’s by far the sunniest thing Roth ever wrote and ends with the marriage of Ira Stigman, his fictional alter ego, to a character called M, a stand-in for Muriel Parker, a composer who was married to Roth for 51 years of Job-like hardship.
Full story at NYT.
Posted by Beattie's Book Blog at 6:57 am