The search for the most compelling and enjoyable business book of 2010 is under way. This year, the winner of the award will receive £30,000, while the prize money for other finalists has doubled from £5,000 to £10,000.

Now in its sixth year, the Business Book of the Year Award is firmly established as a feature of the business and publishing calendars. This year’s awards ceremony and dinner – attended by top names from the worlds of finance, economics, business, media and publishing – will take place in New York on October 27, 2010.
Publishers can enter books online. The closing date for submissions is June 30, 2010. 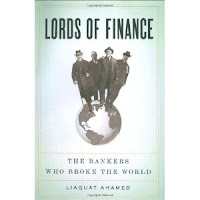 Last year’s winner, Liaquat Ahamed, went on to win a Pulitzer Prize for his book Lords of Finance, about the central bankers whose mistakes helped tip the world into the Great Depression.

The judging panel is co-chaired by Lionel Barber, editor of the Financial Times, and Lloyd Blankfein, chairman and chief executive officer of Goldman Sachs. The other judges for this year’s prize are: Helen Alexander, president of the CBI, the UK business association; Lynda Gratton, professor of management practice at London Business School; and former European commissioner Mario Monti, president of Milan’s Bocconi University and the Bruegel think-tank.
Posted by Beattie's Book Blog at 7:14 am