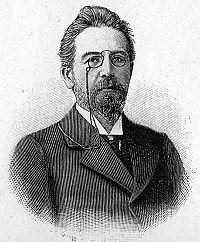 Whenever I hear writers reading their own work, I fake a migraine and flee to my room

Mark Ravenhill writing in The Guardian,
Monday October 27 2008
There's a photograph of Anton Chekhov that thrills me every time I see it. The great playwright is opening a copy of The Seagull, and gathered around him are the actors of the Moscow Art Theatre. Chekhov, it seems, is going to read them his entire play - all the characters and stage directions. It's not something today's playwrights do, at least in Britain: first readings are given by the actors. But how exciting it would be, I always think, to be there in Moscow and to hear those words come from the great man's mouth.
Although the image is carefully posed, in the manner of late 19th-century photography, it manages to convey the nervous excitement in the room. Chekhov was a celebrated short-story writer, but the first production of The Seagull, produced by another company, had been very badly received. So there's everything at stake for him in the moment he's caught by the lens. Will his play be consigned to the remainder bin of drama, or will his bold break away from the era's melodrama be vindicated? The actors of the newly formed company know, too, that this is an important moment. The reading could reveal an authentic new Russian voice that will justify their new theatre and working methods. Or they could be saddled for months performing another play that doesn't quite work.
Read the full stroy at the Guardian online.
Posted by Beattie's Book Blog at 4:17 pm

Excellent eggcorn there Bookman!
A stroy is a coining which should be more used: "I was going to tell this story but then I heard this excellent bit of gossip/misinfo/undermining so it's now a stroy-"