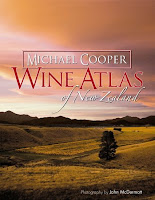 The first edition, which unsurprisingly in my view won the Montana Medal for non-fiction in the 2003 Montana New Zealand Book Awards, has been out of print for some while so this completely updated and extended second edition with its superb new photographs and maps will be lapped up by all lovers on New Zealand wine. It is the bible on the subject coming as it does from Michael Cooper, the foremost authority in this field, a wine writer and journalist with an international reputation who was appointed an Officer of the New Zealand Order of Merit in 2004 for his services to wine writing.

Although this is the second edition of Wine Atlas of New Zealand when you compare the two side by side as I have been happily doing for several hours you find there is little similarity between the two.
First off this new edition is significantly larger, over 400 pages compared to 288 pages of the earlier edition. I guess this reflects the growth in the wine industry with the number of wine producing companies increasing by almost 200 and the acreage under grapes more than doubling since publication of the first edition. Cooper discusses in depth these significant changes including the enormous growth in export sales. This year has witnessed the highest yield ever achieved in New Zealand.

The second big difference one notices are the amazing new maps with each region being represented by a 3-d map giving a bird’s eye view of the whole region and then this is followed by sub-regional maps showing the location of all the wineries along with the key roads on which they are located.

Then of course there is the stunning photography of John McDermott, a master of his trade, including the truly gorgeous double page spread photos prior to each regional map. There are also scores of photos of individual vineyards and many of the individuals that grow the grapes and make the wine.
And a new feature is a series of Winemaker of Distinction pages throughout the book featuring such figures as George Fistonich of Villa Maria, Steve Smith of Craggy Range, Clive Paton of Ata Rangi, Michelle Richardson and others.

The book begins with chapters on A Brief History of Wine in New Zealand, New Zealand Wine in a Global Market, Climate, Soil & Topography, The Principal Grape Varieties, Making Wine in New Zealand, Laws and Labels and then of course each region is dealt with by Cooper in great detail. The book concludes with an extensive bibliography and index.

The publishers have done a fine job and I totally endorse their claim that the book is visually stunning, informative, authoritative and entertaining. I’d go further and say that it is also a work of art and that among the 200 plus wine titles I have accumulated from all over the world over many years this is an absolute standout.
Well done Michael Cooper, John McDermott and Hachette Livre.

Above pics left and right, Craggy Range, should be one wide pic as it is in book.

Posted by Beattie's Book Blog at 5:45 am

Excellent Graham
Many thanks
Xmas gift for Home !
The Coterie in Widnes ...
Thanx
Andy
Penguin 1974