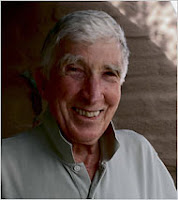 Old Black Magic Is Old, and So Are These Witches


By MICHIKO KAKUTANI writing in The New York Times, October 19, 2008

John Updike (pic left)once described his 1984 novel, “The Witches of Eastwick,” as an attempt by him to “make things right with my, what shall we call them, feminist detractors,” who complained, he said, that he tended to portray women as “wives, sex objects and purely domestic creatures.” 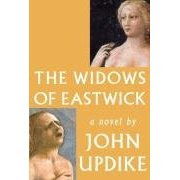 THE WIDOWS of EASTWICK
By John Updike
308 pages. Alfred A. Knopf. $24.95.
It was a curious statement since it seemed odd that a writer would feel the need to answer his critics in a novel and odd since Mr. Updike’s earlier books, which happened to focus on male characters, seemed no more sexist than, say, novels focusing on women characters written by the likes of Erica Jong or Sue Miller.
What’s more, Mr. Updike’s effort to bring what he called active and dynamic women center stage actually did result in a misogynist morality tale: “Witches” depicted the liberated women of the late ’60s and ’70s as black-magic wielding witches, shameless women who not only abandon their duties as mothers and wives to pursue silly, dilettantish careers but also go so far as to murder another woman who has stolen the one man they all covet. The novel played upon the same fears that fueled the Salem witch trials, portraying its three heroines as conniving, promiscuous, jealous and irresponsible narcissists, eager to use their feminine wiles to manipulate men and destroy more guileless women.
In Mr. Updike’s latest novel, “The Widows of Eastwick,” Alexandra, Jane and Sukie are back. In the decades that have passed, they’ve all left Eastwick, conjured new husbands for themselves and gone their separate ways.
Read the full review online.
Posted by Beattie's Book Blog at 8:10 pm

haha. i believe witches are dangerous. there are lots of witches here in our place

A flawed Updike novel is still considerably better than the very best outpourings of most popular authors. I love the "maleness" of his perspective and the love he has for his casts of characters and his capturing of the zeitgeist...I am still grieving for Rabbit.