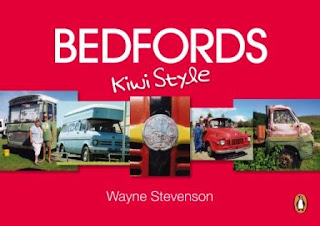 When I was a boy growing up in Gisborne my Dad drove a Bedford truck. He was a driver/partner in the local trucking firm, Nicols Transport. They had a dozen or so trucks and they were all Bedfords. They were all numbered and his was number 5. After a certain mileage was reached, usually after about 5 years, his old model would be replaced by a shiny new one, the new number 5.

We didn’t own a family car so weekend outings to the beach or country or to visit family were made in the Bedford. Mum & dad in the cab and the four of us kids on the back. And in the school holidays we were sometimes allowed to go to work for the day with Dad as he delivered goods to retail stores around town that we had previously picked up from the wharf or railway station. Or perhaps bags of flour from the South Island that had been shipped up from the South Island to be delivered to Finlay’s the local baker.
It was very exciting as a young boy travelling around Gisborne in Dad’s Bedfords. Then later when I was 15 I learned to drive in number five and in due course I went off in the Bedford with a local traffic cop to do my driving test. It is only in the last few years that I finally allowed my heavy transport driver’s licence to lapse.
And I must record that each of Nicols Transport's Bedford trucks. all painted green, carried the company slogan painted in lemon on the back of each cab - You Call We Haul.

So it was with great excitement that I opened Bedfords in Style by Wayne Stevenson when it arrived last week. This is a book of 96 pages with hundreds of superb colour pics of Bedfords of every age and model and colour – buses, vans and trucks – they are all here. Fascinating stuff and of course for me a real nostalgia trip.
The one disappointment for me with this book however is the absence of any significant text.
I wanted to know more about Bedfords - where were they made, when did they start being manufactured, are they still going etc?

So off I went to Google and thanks to Wikipedia I established that
“Bedford was a subsidiary of Vauxhall Motors, itself the British subsidiary of General Motors (GM), established in 1930 and constructing commercial vehicles.
Bedford was a leading international truck manufacturer with substantial export sales of light medium and heavy trucks throughout the world. It was GM Europe's most profitable venture for several years.”

Sadly they seem to have stopped manufacture in the mid-1980’s. This book then is an especially valuable record of Bedfords in New Zealand and in spite of the absence of written history I am delighted to have this pictorial record of these great work horses from earlier times. And to have the happy memories of Dad's Bedford, number 5.
BEDFORDS KIWI STYLE – Wayne Stevenson – Penguin - $35 will be published in New Zealand on 27 October 2008.

Published just a couple of weeks earlier, also by Penguin Books, is another title guaranteed to induce moments of nostalgia for many Kiwis: John McCrystal is a freelance writer and book reviewer who in the last 10 years has become one of New Zealand’s most noted motoring and travel writers with a handful of books to his credit.
In his latest outing he takes the names redolent with the heyday of British car manufacturing – Morris Minor, Ford Prefect, Vauxhall Wyvern, Mk 1&2 Zephyr, Morris Eight and many many others – then mixes in the great American brands from the same era – Ramblers, Fairlanes, Firebirds, Mustangs, Camaros and heaps more to present a pleasing result featuring the classic cars beloved by so many. Many of my generation will find their first car in here.

Loads of beautiful photographs accompanied by a full, well-written and interesting commentary. I wager many a man is going to find this gem in their stocking this Christmas (only 10 weeks away!!).
Posted by Beattie's Book Blog at 7:18 am

Cool about the Bedford book. We've got a JO residing in our garage which occasionally gets taken out for a blat. That's real driving for you. Those gear changes require physical dexterity and strength, not to mention mental fortitude. But it purrs like a tiger.
Anyway thanks for the Xmas present solution!
Lee

Yes changing gear was a real skill - It required something called double-declutching !!

Beattie's Book Blog said...
This comment has been removed by the author.
4:00 pm