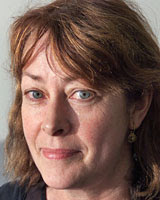 Treasures for the child in us all
Where else but in New Zealand would the phrase ``Quardle oodle ardle wardle doodle'' be part of the lexicon?
Linda Herrick, book and arts editor, writing in the Weekend Herald last Saturday

AT THIS stage of what feels like a very long year, it's soothing to look at a book with pretty pictures that doesn't hurt your brain too much. Unfortunately, quite a few art books make your eyes water because the prose is so academic. The pictures may be great but the product is muddied by impenetrable English.
But there is an antidote - art books aimed at kids, but attractive to any age, with clear text, and not too much of it either.There are many splendid New Zealand art books designed for younger readers that we can all enjoy.
Gregory O'Brien's Back & Beyond provides an accessible and interesting exploration of New Zealand artists as ``more heroic than you might think at first. Art has always been a shaky way of making a living in this country,'' he writes in the introduction. ``Even in the 21st century it is difficult as a painter to make enough money to live on. It requires courage and commitment, as well as imagination and skill.''
Two other books go in another direction. The Magpies revives Denis Glover's classic poem with illustrations by artist Dick Frizzell, in a reprint of an award-winning partnership.
And who knew James K. Baxter wrote such terrific poems for children in the 1950s? Baxter Basics gathers six such poems together, brought to life by some charming art work by four of our top picture book illustrators. So, if you can't take phrases like ``ideological motivations'', ``representational systems'' and ``emblematises'', try these for clarity and pure enjoyment. 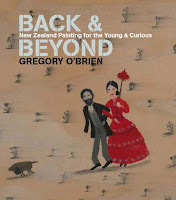 BACK & BEYOND: NZ PAINTING FOR THE YOUNG & CURIOUS
By Gregory O'Brien(AUP $34.99)
O'Brien's introduction to this beautifully produced book is called Shaky Islands, a term he first encountered while living in Sydney in the 80s. Both Ockers and Kiwis used the phrase in a mocking way whereas O'Brien saw it, and still does, as ``overwhelmingly positive ... if the country is shaking, I think it is more from excitement than from nervousness''.
This collection is certainly exciting, ranging from the Shaky Islands chapter, which includes works by Shane Cotton, Sydney Parkinson, Pat Hanly and Grahame Sydney.
O'Brien then travels through Way Back When (Len Lye, E. Mervyn Taylor, Tony Fomison, John Walsh and more), Dreams and Discoveries (includes Charles Heaphy, Harry Watson, Doris Lusk and Saskia Leek, whose Untitled Study for Picnic at Woodhaugh graces the book's cover), Citizens and Saints (A. Lois White, Frances Hodgkins, Colin and Anne McCahon, Leo Bensemann) and winds up with No Time Like the Present (including Joanna Braithwaite, Michael Shepherd, Richard Lewer, Stanley Palmer, Phil Judd).
O'Brien's approach is imaginative, often linking a work on one page by one artist with a work on the facing page by another. Musician Phil Judd's painting Mental Notes (1973-74), created when he was in Split Enz, was reproduced for the band's first album. ``Up until the time that rock band Split Enz became well known,'' writes O'Brien, ``it seemed to me that New Zealand music tended to copy what was happening overseas. Split Enz changed that ... I didn't understand anything about it: the clown-faced baby, the sky seeping into everything. But that didn't matter.''
O'Brien juxtaposes Mental Notes with Town Boundary (1969) by Brent Wong, another ``great painter of realistic pictures in which very unrealistic things happen''.A few pages on, under the title Strange Birds and ordinary life, Rest Area Limbo Ledge (2002) by Bill Hammond faces Stanley Palmer's Jones' Farm After Milking Time (2006). Hammond's birds of the imagination look towards a cow on a farm. ``Both could only have been made in Aotearoa New Zealand. Both of them touch down on the soil of this country, while at the same time performing imaginative somersaults in the dizzying blue sky above,'' writes O'Brien.
This is a treasure trove of a book which never patronises and, with end-plates of maps of New Zealand depicting our artistic geography and history, excellent value indeed for the curious. 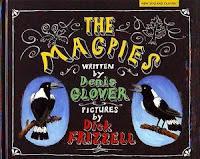 THE MAGPIES
By Denis Glover & Dick Frizzell(Random House $27.99)
Where else but in New Zealand would the phrase ``Quardle oodle ardle wardle doodle'' be part of the lexicon? The tale of farmers Tom and Elizabeth who worked ``year in year out'' but were defeated by the nasty mortgage man ends with Elizabeth's death (``it's years ago'') and ``Old Tom went light in the head''.
Frizzell's naive yet evocative images for the poem were first published in 1987, winning the 1988 Russell Clark Award for illustrations. Although out of print for some time, this new edition is Random House's third new issue of classic picture books, after Gavin Bishop's Mrs McGinty and the Bizarre Plant and The Adventures of Sydney Penguin, by David Elliott.The structure is part of The Magpies' charm, with the birds' ``quardle oodle'' hidden beneath a flap on each right-hand page.
There are not just magpies on the pages either, but a plough horse, a faithful dog and chooks to keep Old Tom company as he fades away, light in the head. A beautiful little book - and so poignant.

BAXTER BASICS
by James K. Baxter(Steele Roberts $29.99)
In 1954, Baxter was a teacher and writing poems for children which were later published in 1974 under the title The Tree House.
In 1979, seven years after his death, Price Milburn produced the six poems contained within this book as separate booklets. Brought together by Steele Roberts, each poem is matched by delightfully old-fashioned illustrations reflecting the era in which they were first produced.The poems - Rain, I'm a Tree, The Tree House, The Seagull, The Ships, The Firemen - are wedded with drawings by Judith Trevelyan, Lynley Dodd, Ernest Papps and Dawn Johnston; they reflect a lighter side of Baxter: whimsical and affectionate. The Firemen includes a phrase no one would usually associate with Baxter: ``The biggest fireman / carries down / a fat old lady / in her dressing gown.'' I guess this one really is for the kids.
The Bookman thanks Linda Herrick and the New Zealand Herald for permission to reproduce this thoughtful article.
Posted by Beattie's Book Blog at 3:42 pm